Release of debut album on hold 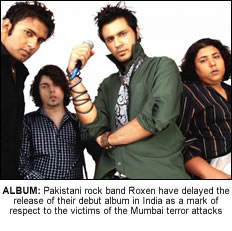 A LEADING Pakistani rock band have delayed the release of their debut album in India in light of last months Mumbai terror attacks.
Four-man-band Roxen said they understood it “wasn’t the right time” to promote their debut album.
The band, currently signed with an Indian record label, were due to fly to Mumbai this week to begin promotional work.
The band’s lead vocalist, Mustafa Zahid, revealed: “It’s not the right time for us to release an album knowing what India has gone through. I would love to take my band across cities in India to do a Peace show and involve members of the film and music community from India with whom I have worked with in the past but that seems difficult at the moment. Therefore, we have delayed the release of the album in India and Pakistan and will announce a re-scheduled date very soon.”
He added: “I would like to add that it’s not the nations that hate each other but certain political faces and agencies. Terrorists have no religion and it’s sad for them to think that ‘jannat’ is a result of jihad. Time is the best healer. Everything will be fine, as both the countries have a purana rishta with each other.”
The band are one of Pakistan’s biggest music acts and have also worked extensively in Bollywood.