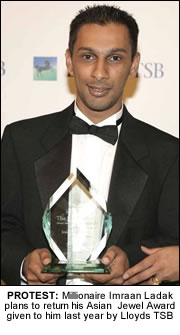 A BRITISH Asian millionaire has said he will return an award given to him by a High Street bank in protest at their treatment of a UK charity who distributes humanitarian aid to Palestine.
Imraan Ladak, CEO of DRC Locums which is the second largest supplier of Locom Doctors in the UK, said he plans to hand back the Asian Jewel Award given to him in 2007 by Lloyds TSB in protest after they instructed the Islamic Bank of Britain (IBB) to close the account of UK charity Interpal.
Mr Ladak, who received the Business & Commerce Excellence Jewel Award last year, said he was angered at the way the bank had treated the charity who provide vital aid to Palestinians.
The charity has failed in its attempts to meet with officials from Lloyds TSB and have until the end of January to find an alternative bank.
Although no explanation has been given to Interpal over the termination it is widely believed long-standing unproven allegations that the charity funds terrorist organisations in Palestine are behind the move.
Interpal officials have always denied the allegations. The Charity Commission investigated the charity in 1996 and 2003 – it was cleared both times.
A number of organisations have also been forced to issue apologies after repeating the allegations.
Mr Ladak, whose non-league football club Kettering Town FC display Interpal’s name as shirt sponsors, said he was angered at the banks actions.
“Lloyds TSB’s plans can only result in escalating the horrific suffering of innocent children, supported by those with racially motivated agendas,” he said.
“I no longer trust that Lloyds TSB follow the equal opportunities and anti-racist principles the Asian Jewel Awards are based upon. At Kettering Town, like the majority of British football clubs, we value success on and off the field equally. Off the field includes supporting and promoting humanitarian causes and dozens of charities and we won’t change these principles, even for a Goliath like Lloyds TSB.”
Mr Ladak said he was sent a letter by Lloyds TSB in November denying they had instructed the Islamic Bank of Britain to close Interpal’s account.
In the letter Lloyds TSB told Mr Ladak: “Lloyds TSB does not hold or never has held accounts for Interpal. Furthermore, Lloyds TSB would not direct nor would it be appropriate for us to direct another institution on how to deal with its own customers.”
But in a letter dated 8 October which was leaked to Mr Ladak, Lloyds TSB instruct the Islamic Bank of Britain, who it acts as a clearing bank for, to cease its dealings with Interpal.
That letter states: “We [Lloyds TSB] do not wish you to transfer, receive, process or in any way deal with any funds, or in any way whatsoever be involved with any type of banking arrangements for Interpal.”
Mr Ladak said he had contacted Lloyds TSB Chairman Sir Victor Blank and board member Sir David Manning about the situation but was still waiting for a reply.
Ibrahim Hewitt, Interpal’s chairman applauded Mr Ladak for his stance against the bank.
“For Imraan to do what he is doing is amazing when all institutions are going through difficult business times. He should be applauded for his ethical stance against a bank with apparently scant regard for the effect of its actions on the tens of thousands of beneficiaries of Interpal’s humanitarian aid,” Mr. Hewitt said.