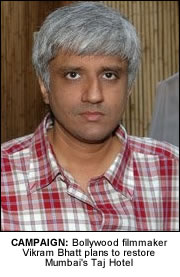 A BOLLYWOOD director has begun a campaign to rebuild Mumbai’s iconic Taj Hotel which was severely damaged during the recent terror attacks in the city.
Leading filmmaker Vikram Bhatt said he would ask everyone in India to donate one rupee to aid restoration of the iconic hotel.
He revealed details of the campaign to BBC Asian Network DJ’s Raj and Pablo.
“It’s just something I thought of last night and the campaign is really in the early stages,” Mr Bhatt said.
“I’m still working on a blueprint – but the idea is simple, I think all of us in Mumbai should give just one rupee towards the rebuilding of that monument, whether you’re rich or poor – all of us can afford that one rupee.”
He added the attack on the Taj hotel was an attack on the whole of India.
“The Taj is not just a hotel; it’s the heritage of the city. The hotel was built in the time of the British Raj and it was one of the first icons of independent India,” he said.
“I think attacking the Taj is attacking the independence and sovereignty of our country and so I think every person in Mumbai should help to rebuild it as a sign of what we feel for our country – not that Mr Ratan Tata (chairman of the Tata Group that owns the hotel) doesn’t have the money to build it again but because it’s our heritage.”