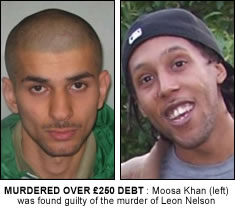 A MAN who callously stabbed another man to death over a debt of £250 has been sentenced to life today.
Moosa Khan, 20, plunged a knife into the stomach of 23-year-old Leon Nelson following an argument over a £250 debt in July last year.
Today Khan was sentenced to life imprisonment at the Old Bailey with the recommendation that he serve a minimum of 18 years before being considered for parole.
The Old Bailey was told that on July 31 last year Mr Nelson was with friends outside Pulham House on the South Lambeth Estate, when he was approached by Khan.
According to witnesses, the two men argued and then Khan stabbed Leon Nelson once in the stomach. He died just under an hour later at St Thomas’ Hospital.
Enquiries by detectives from the Met’s Homicide and Serious Crime Command quickly identified Khan as a suspect, and when officers visited his home they found he had not been back there since the night of the murder.
Further enquiries into his whereabouts resulted in Khan handing himself in to Croydon police station, where he was arrested.
During interview, and despite being identified by witnesses as Leon’s attacker, he denied being at the scene and refused to answer any other questions.
Officers also established that Khan had made over 150 calls to Leon over the five days before his death, including a final threatening text message around an hour before he was stabbed.
Detective Inspector Rick Murphy, who led the investigation, said: “Today’s result demonstrates our commitment to taking off the streets those who choose to resolve their disputes with knives.
“I’d like to thank the witnesses who were brave enough to come forward, a number of whom were able to give evidence from behind screens to protect their identity.
“Their evidence was vital in securing the conviction of a violent young man.”