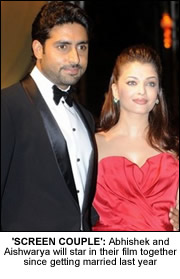 BOLLYWOOD actor Abhishek Bachchan has hit out at critics of his wife who claim she possess nothing more than good looks.
Former Miss World, Aishwarya has evoked criticism in the past for her roles in non-Bollywood productions ‘Bride and Prejudice’ and ‘Provoked’.
Speaking to the BBC Asian Network’s Raj and Pablo, Abhishek said it was wrong to imply his wife wasn’t a good actress.
“When she first came into the industry yes- she was Miss World. Yes she still is the most beautiful woman on Earth. That’s something that has stuck with her”, Abhishek said.
“There’s no denying it a lot of her charm is in her beauty and her demeanour, that’s not to take away her performance capabilities. And they always say that she’s only about good looks and she’s very plastic. But actually if you go to see, and now I’m not speaking as a husband, I’m speaking as a co-star and an actor, she happens to have done some of the most daring kind of roles that an actor who’s only meant to be known for her beauty could have done.
“The least vain about her looks, she has done a movie like Provoked, Choker Bali, a Raincoat, she’s done a Guru. She’s done movies which don’t focus on her beauty but focus on her talent, but that’s never recognised.”

The couple are currently gearing up for their first film since getting married.
‘Sarkar Raj’, which also stars Amitabh Bachchan, has received rave reviews and will be released in the UK this week.
Abhishek revealed he found it hard at times during the filming of ‘Sarkar Raj’ to get into character when filming scenes with his wife.
“There is this one scene between Anita and Shankar where she is telling him how she feels about him. Shankar is meant to reciprocate initially and suddenly Ramu after the first take said “What are you doing?! You are behaving like she is your wife! Hold back a bit!” You get so involved sometimes you just forget! All of a sudden from Anita, she becomes Aishwarya again, and you’re like Ok! Okay honey, let’s go!”


You can down load the Abhishek and Aishwarya interview direct from the BBC Asian Network  website http://www.bbc.co.uk/asiannetwork