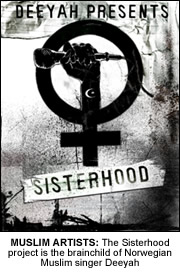 FEMALE Muslim artists from across the world have come together for a new music project.
‘Sisterhood’ is the collective name for a mixtape project of previously unreleased songs written by young up and coming female Muslim rappers, singers and poetesses from the UK, Europe and US.

Their songs deal with a range of issues that each has been affected by on some level ranging from the war in Iraq to racism, love, romance, living in a post 9/11 world, to women’s rights issues, faith and personal experiences of being young socially conscious Muslim women in the West.
The project is the brainchild of Norwegian Muslim singer Deeyah who has been described as the ‘Muslim Madonna’ for her controversial style.
“This is just the first small step towards encouraging these artists and others like them out there to pursue their dreams and hopes,” says Deeyah, who selected this first volume of songs from scores submitted to her.
“A way to let them know they are not alone in their struggles and hardship to get their music and message out there.”

The tracks will be streamed online for music fans to listen to.

Deeyah added: “Although some of the ladies on the project are at the very beginning of their musical journey and just starting to explore and discover their creative and artistic expression I hope that with this project they will find inspiration and encouragement from each other to further develop and hone their craft”.

“Hopefully we can help create a platform to have their voices and opinions heard as both artists and Muslim women living in Western societies. Female Muslim artists face a tough time. There’s very little support for them, many of them have been actively discouraged– even by their own communities– from expressing their thoughts and dreams through music. But they are not alone as this first collection proves…they have something to say and they deserve to be heard.”
To listen to the tracks CLICK HERE