Offlicence team up with Apache Indian 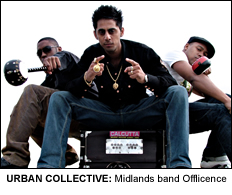 A WEST Midlands Asian music group is hoping to use their music to unite different cultures.
Offlicence, a Midlands based group consisting of vocalist Sunny J, and rappers Lexeye and Projay, will release the first single ‘Indian Ting’ from their highly anticipated album ‘Desilution’ later this month.
The boys have roped in rapper Apache Indian for the song.
“Indian Ting reflects our diverse cultural influences and backgrounds that make up modern Britain”, Offlicence member Sunny J said.
“I believe that ethnic minorities do have a voice in the UK, this song is an expression of unity between Britain’s two biggest subcultures.”
Apache Indian, a mainstream star in the 90s with hits ‘Arranged Marriage’ and ‘Boom Shack-A-Lak’, was all praise for the group.
“Meeting the boys and listening to the sound of what they represent, It was great, I thought it was very new”, he said.
“I believe they have so much to offer, the world has to wait for this album, we need something fresh. As I look, we have so many people from different backgrounds, different styles, you have reggae, you have hip-hop, you have Bhangra. If used in the right way, people sometimes use them in the wrong way. These are real kind of musicians and artist that I think have a big future.”
The video medley for Indian Ting also features Laddi Bath (One Pegg More), guest appearances by Notorious Jatt, Hayezsquad Ltd and finalists from the hit ITV show ‘Britain’s Got talent’ – Kombat Breakers.
White reggae artist Cheshire Cat, a veteran in the Bhangra industry also explains his views and opinions on modern Britain on the official Indian Ting remix.
“Indian Ting” Ft Apache Indian will be available for purchase in all good music stores, iTunes & other distribution outlets – mid April.