Saif Ali Khan on being an Olympic torchbearer 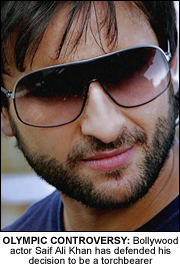 ON the eve of the Summer Olympics torch relay in New Delhi, Bollywood actor Saif Ali Khan, is facing a tough race. Shrugging off controversy, the star spoke to Steven Baker on his latest controversial role- playing the part of Olympic torchbearer.
After global demonstrations against China’s human rights record, Khan defended his decision to take part in the event, “My reasons for running are to honour my commitments as brand ambassador for the Lenova group, one of the sponsors of the Olympics.”
The actor justified why he was taking part, “Maybe I’m being idealistic. But we have issues with Pakistan over Kashmir, and we still play cricket with them. It’s good that the cause of Tibet is highlighted, but in a perfect world sport and politics would remain separate. The Dalai Lama himself has said he is supporting the Olympics.”
In an atmosphere where a number of the country’s celebrities from sport and film (including actress Soha Ali Khan) have pulled out of the Indian leg of the globe-trotting ritual, Saif reflected, “It’s a personal issue. My sister, for example, is not supporting this and I respect her decision.”
After last year’s health scare when Saif was admitted to hospital with chest pains, the performer is making an effort to stay fit. “It was an almost heart attack, caused by exertion from dancing,” Khan asserts. “I used to smoke a lot, but then quit,” the star adds.
He puts down his new found healthy living to, “a bit of Kareena’s influence.” And how has the ‘Race’ star been staying in shape before the relay? “I do about 45 minutes on the treadmill, running between 6 and 9km an hour.”
With two thumbs up, Khan signs off by giving his support to the Indian competitors at the 2008 Summer Olympics, “I’d like to wish all of our sports stars all the best.”
Steven Baker is a UK writer who divides his time between London, Delhi, and Mumbai. Steven is best known for his writing on the Hindi Film Industry, his work regularly appears in a range of Indian, NRI, and international publications. Steven Baker is presently the Co-ordinator of the British Council’s Creative Writing course in New Delhi. He has also appeared in 15 Bollywood films.