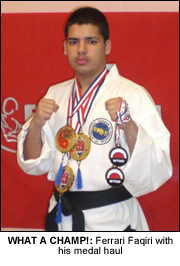 THE SKY’S the limit for a young Karate and Taekwondo champ after he scooped four gold medals in two tournaments in America.
17-year-old Ferrari Faqiri is certainly living up to his name after phenomenal performances landed him four Gold medals and one Silver in tournaments in New Jersey and New York.
The youngster travelled from his hometown of Preston to America admitting the experience of participating in the tournaments would be good enough.
But much to his surprise he even exceeded his own expectations.
At the Junior Olympics Taekwondo Qualifier’s in New Jersey he picked up three Gold medals – more than his competitors, and followed up the achievement with one Gold and one Silver at the North American Karate Championship in Staten Island, New York a week later.
Speaking to The Asian Today, a delighted Ferrari said: “It feels great to succeed in America. I was very confident of doing well again because I’ve been there before and I’m getting used to travelling to America and competing so it’s a great experience.
“To pick up as many medals as I did was great because I don’t think anyone else has achieved that at that tournament so it was great.”

Ferrari’s love for Taekwondo began at the early age of five, leading him eventually to Karate at the age of 10.
His parents support him 100% – his father Hashmat is his coach, while mum Janet, is credited with introducing the youngster to the sport all those years ago.
“At first my mum saw Martial Art’s as a way to help build my stamina because I was very sick as a child and it eventually helped out a lot and I continued to succeed and improve my health”, Ferrari reveals.
But for the Preston lad himself, he was eager to make his own mark in Marital Arts – a sport that has little recognition within the Asian community.
“I see a lot of Asian kids these day’s trying to be cricket players or boxers but I want to do something different and create my own path”, he admits.
“I want to see how far I can get within the sport that is not truly recognised within our community.”
For the time being Ferrari is focussed on his next goal – becoming Junior Olympic Champion by the end of July.
He will compete in the Junior Olympics in Detroit this summer with all the ingredients on hand to make his dream become a reality.
“My dad tells me all the time to give it my best and I don’t let my success get to my head because once you do that you begin to lose the hunger to do well. I want to continue doing my best by defending my World Karate and Taekwondo Championship’s but ultimately one day I want to be the Olympic and Commonwealth Champion.”
Here’s betting he will.

Bhangra Star Deported after nearly decade on the run

‘Dracula’ – transformed with an Eastern twist