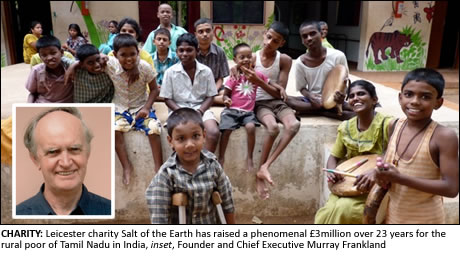 A LEICESTER charity established over twenty years ago to support work with the rural poor of Tamil Nadu in India is celebrating having raised a phenomenal £3million.
Salt of the Earth, a small charity based in the East Midlands, has been helping one of India’s poorest communities for 23 years.
Money raised is allocated to specific activities operated by Tamil Nadu-NGO, Social Change and Development (SCAD), which works with 500 villages with a population of 400,000. The rural poor make up just under half the 70m population in Tamil Nadu, a state as large as Great Britain with the average wage being just under £250 per annum.
The region struggles with water shortages, poor soil and a lack of adequate provision for many of the basic health, educational and social support services taken for granted here in the UK.
Despite the considerable sum of money that is raised each year the charity has no paid employees and relies exclusively on volunteers. This enables every penny received to be sent direct to the project without any deductions.
Founder and Chief Executive Murray Frankland said: “Salt of the Earth is run entirely by volunteers and we have created what we call a network charity – established and operated long before the days when networks became a buzzword. It’s a testament to our supporters’ belief in the value of the work being done by SCAD that they have helped us to raise such an incredible amount of money over the years.
“Sadly, despite India being regarded as a new economy, I don’t see the vital work that we support abating as the gap between rich and poor in India is ever widening. It is, therefore, our intention to continue to raise the funds required for many years to come.”
Money raised by the charity has helped fund a wide-rage of activities including £100,000 on rainwater harvesting tanks for schools, £400,000 on a scheme for offering day care and outreach care of abandoned elders and £200,000 towards the Sathya Naga leprosy village, which has been supported by Salt of the Earth from the start.
SCAD Founder Cletus Babu said: “The ongoing commitment of Salt of the Earth to our work over the years has been of paramount importance to us. Knowing that Salt of the Earth was behind us providing core funding has given us the confidence and courage to expand and develop our programmes for the rural poor.
For more information on the charity go to www.salt-of-the-earth.org.uk