Former captain says team has a long way to go 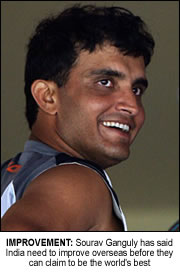 INDIA have along way to go before they can claim to be the world’s number one side, former captain Sourav Ganguly has said.
The team had an exceptional 2008, recording Test victories against England and Australia, as well as convincing one-day triumphs in Australia and Sri Lanka.
Results under inspirational captain Mahendra Singh Dhoni and the emergence of talented young players, combined with indifferent performances by world champions Australia, has left many commentators in no doubt as to India’s ability to become the world’s best team.
But Ganguly, who retired from International cricket last year, said the team had a long way to go before they could claim to be the world’s best.
“To say that India would be number one, I think it’s a bit too early”, Ganguly told India’s NDTV. “Look at the ICC points rankings… Australia, though they have not played good cricket for the last 3-4 months, are still a few points away from the rest.
“India have a very good team but I believe their real test will be overseas, when India go to New Zealand and when they start travelling abroad. If you look at the last year, India has played a lot of cricket at home.”
Ganguly said India would have to measure up to South Africa who are close to toppling world champions Australia in the ICC Test Rankings list.
“If you look at South Africa’s performance in the last nine series, they have not dropped a series. It’s been all round the world. They have beaten Australia in Australia, they went to England and beat them convincingly,” Ganguly added.
India are hoping to continue their good form into 2009, but real tests will come when they visit New Zealand where they have not won in four decades, and in England in the Summer when they defend their World Twenty20 crown.

That’s perhaps not uncommon in what’s however a creating connection. Unfortunately, the concerns and anxiousness may.

Mother of Mikaeel Appears in Court

Birmingham Hippodrome joins forces with the Asian Business Chamber of Commerce to celebrate the...