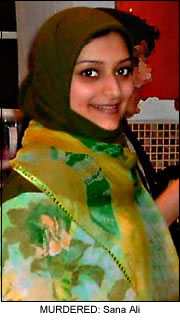 A BIRMINGHAM woman has been charged with the murder of a pregnant teenager found stabbed in her Bury home.
Seventeen-year-old Sana Ali was found with stab wounds at her home in Throstle Grove, Bury last Friday.
She was rushed to hospital but suffered a heart attack in the ambulance and was pronounced dead shortly after.
22-year-old Harmohinder Kaur Sanghera, of Monastry Drive in Solihull, was charged with Mrs Ali’s murder last night by detectives.
A 24-year-old man and a 16-year-old boy who were also been arrested in connection with the incident have been bailed until 5 June 2007.
The 22-year-old woman is due to appear at Bury Magistrates’ Court later today.
Mrs Ali, who was two months pregnant, died as a result of stab wounds to the chest and the abdomen.
Originally from Pakistan, Mrs Ali moved to the UK five years ago and married her husband in December 2006.