Home Sports Harbhajan in the clear over crowd complaints 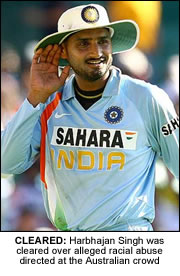 INDIAN spinner Harbhajan Singh has been cleared over complaints that he racially abused Australian fans.
Newspaper reports across Australia reported that Harbhajan had made monkey gestures and spat at some Australian supporters during his side’s CB Series Final match against Australia.
But match referee Jeff Crowe said the ICC would not be taking any action against the spinner after reviewing evidence of the alleged incident.
“I have investigated the alleged incident with Cricket Australia’s ground security officials after reading newspaper reports and viewing related photographs that have been published. After reviewing all available information, I conclude that there is no need to take any action against Harbhajan Singh,” Crowe said in a press statement.
Earlier Indian team officials said they were convinced Harbhajan had done nothing wrong. “He did nothing,” said team manager Bimal Soni. “These stories, I do not believe them and strongly condemn them. I think it is wrong.
“Nothing has been done like that, they are making a mountain out of a molehill.”
Former Australian captain Alan Border also jumped to Harbhajan’s defence saying the spinner was made to endure all sorts from the Australian crowd.
“I was on that side of the ground yesterday and Harbhajan was copping a fair bit of stick from the crowd”, he said.
“I didn’t notice any gestures at all and I thought he handled himself quite well to be quite honest.”
The incident is another controversial episode to hit the headlines during India’s tour of Australia.
Harbhajan had a three-game ban overturned after it was alleged he called Australian all-rounder Andrew Symonds a monkey during the second Test in January.
Last month India’s Ishant Sharma was fined 15% of his match fee for an aggressive gesture aimed at Symonds, and last week Matthew Hayden was reprimanded for calling Harbhajan an “obnoxious weed” during an interview.

70 Rickshaws Riding Through Leicester On Sunday.

Manage I for a financial loan 1a€“2k close

Buyers Paying More for a Home