New flick to get tastebuds sizzling 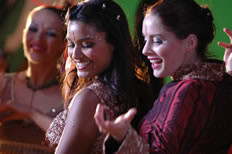 Directing your first feature film may be a hard act to deal with. Waiting for the reviews and anticipating audience reaction may just be even harder. But for debut feature film director Pratibha Parmar, the buzz surrounding her soon to be released project has put her on cloud nine – or should that be cloud heaven?
Award winning UK based music and documentary filmmaker Pratibha  is more than a little excited about her new project ‘Nina’s Heavenly Delights’. The film, which boasts an all-star cast, will be released by Verve pictures on the 29th September. It also has a starring role at the annual Bite the Mango Film Festival in Bradford starting next week. Proving there is a wealth of talent in the British-Asian cinema circuit, the film will play alongside another Brit-Asian film ‘Halal Harry’.
‘Nina’s Heavenly Delights’ stars actresses Shelley Conn and Laura Fraser in the leads. The film which is based in Scotland, tells the story of Nina Shah (Shelley Conn) and her return home following the death of her father. Her return brings many surprises – discovering her father’s gambling debts, a confrontation with a jilted ex-fiancée, and meeting Lisa (Laura Fraser) a charismatic young woman who now owns half the restaurant. While the two begin a close ‘relationship’ it becomes apparent Nina has more to accomplish with the restaurant than she first imagined. Her father’s death has seen the demise of the family restaurant, which is closed and earmarked for a quick sale. It is quickly apparent that the restaurant is being sold and her father’s dream of it winning the ‘Best of the West’ curry for the third year in a row is doomed. With the support of Lisa, an old school friend (Laura Fraser), Nina throws herself into the competition, but things don’t exactly go according to plan.
Speaking to The Asian Today, director Pratibha Parmar reveals her motivation in making the film, and the reasons behind the inclusion of the close ‘relationship’ forged between her lead characters.
‘Nina’s heavenly delights’ is your debut feature film. Did you enjoy the film making experience?
I loved making the film. It was challenging, physically gruelling but ultimately very exciting. The shoot was only 5 weeks and I had to get through some very ambitious set pieces. There are a couple of big dance numbers and the Best of the West Cooking Competition at the end was also a major undertaking. I had a very supportive cast and crew, which made the whole thing possible. For me it was a completion of a passion project that had been my life for the last 6 years. 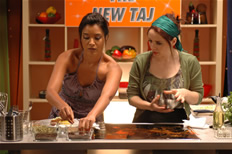 Why this particular story? What was your inspiration behind the film?
I wanted to tell a story about an Indian family who run an Indian restaurant in Glasgow called The New Taj. I wanted to celebrate family, Indian food and love. My background is in documentary film-making and I had made some very hard hitting, political documentaries and I felt it was time for me to have some fun. So I decided to tell this surprising love story. I also love food films like Big Night and Eat Drink Man Woman and I wanted to make a film that captured Indian food in all its glory, the colours, the textures and the sensuality.
Does the film draw on any of your own personal experiences?
Absolutely. I was once told ‘write about what you know’ and so for my first feature film I decided to write a story about a girl who falls in love with another girl and what this means for her family and her. The pull between personal desire and family duty is one that many people in all cultures have experienced and I wanted to explore this in my film. But this is not the only story within the film. I also wanted to show an Indian mother who is not the usual finger wagging Asian mother we have seen before but a woman who is dignified, perceptive and elegant. An Indian mother who feels that she can have a second chance and that her life doesn’t need to end when her husband dies.
The film is due to be released at the end of this month. Are you nervous at what the reaction will be?
Judging from the few preview screenings that I have been at recently there has been a very warm and positive audience response. I am certain that if people go to see the film they will have a great night out. There is a fabulous and energetic soundtrack (album released by SilvaScreen.co.uk) with songs from Jay Sean/Rishi Rich, Holly Valence, The Monkees and also some all time Bollywood classics like Chalte Chalte and Pyar Kya to Darna Kya. And despite the low budget, the film looks lush and glorious so it’s a pleasure to watch. I think people will go out of the cinemas laughing, dancing and go for a curry. That’s what I want – people to be joyful and enjoy life! 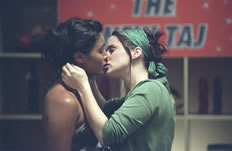 The film touches on what may be regarded as a ‘risqué’ subject matter – the relationship between Nina and Lisa. How do you think audiences are going to react to this?
I hope audiences will root for the girls and want them to live happily ever after. Finding true love is such a rare thing so people know that you have to hang onto that person when you do find it, no matter who they are. I believe that people are open minded enough in these times – after all we are living in the 21st century – to accept diversity and difference. We now have civil partnerships between same sex couples so legally we have come a long way. Culturally there are still some ignorant attitudes out there but I am optimistic they are out numbered by people who are more aware and forward thinking.
At what point did you decide Shelley and Laura were perfect for the leads?
I had cast Laura Fraser immediately. She is a beautiful woman and also extremely talented and she is Scottish which was important to me. I knew that whoever played Nina would not be Scottish and would have to learn that accent. When we were casting for Nina, Shelley came in to read and she had a wonderful smile and was quite innocent and giggly and that suited Nina’s character. The next step was to bring the two of them together in an audition and see how they would spark off each other. I could see immediately that they would be perfect together. As one reviewer has put it ‘the film is hugely appealing with great chemistry between the two gorgeous leads…they sizzle together like the dishes Nina prepares’ 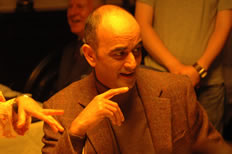 The film also stars the great Art Malik. What was it like working with him?
He was adorable and utterly charming. He is such a professional and it was a pleasure to work with him. It also made it easy for me to have him on set as I had quite a few of the cast who needed a lot of support during the shoot. But with Art, I just had to say a few things and he knew immediately what was needed in the scene. He gives a great performance.
What did you enjoy the most in making this film?
I think I enjoyed the whole process because it was a dream come true. I would have to say the best day was when we shot the Dance Finale scene in which the whole cast and even some of the crew are in. They were all dressed in their magnificent costumes looking totally gorgeous, dancing to Nazia Hassan’s Aap Jaise. That tune is so catchy that even the sparks and the grips were singing and dancing along.
What have you got lined up next? Any future projects?
I have several feature dramas in early stages of development. One is a road movie set in India and another one is a political thriller. I am determined that the next one is not going to take another 6 years to make. So watch this space.
For more information on the film log onto www.ninasheavenlydelights.com
Interview by Zakia Yousaf