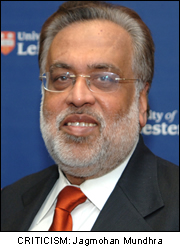 A US film director has accused parts of western academia of demonstrating ‘cultural snobbery’ in disregarding Indian cinema and Bollywood in film studies courses.
Jagmohan Mundhra recently delivered a lecture at the University of Leicester law school in advance of the opening of his film Provoked which stars Aishwarya Rai, Miranda Richardson and Robbie Coltraine. The Triangle Media Group hosted their Biannual Awards Evening at the University of Leicester where Jagmohan Mundhra was one of the award winners.
The former American professor said some academics in the West had ‘a very condescending attitude’ to Indian cinema – but with the growing economic success of Bollywood, attitudes were changing.
University campuses are being used as film locations- and the University of Leicester itself has hosted two Indian film shoots: Is Pyaar Ko Kya Naam Doon and Raakh.
He said: “Bollywood is resonating well with the West now because of its box-office success. US cinema may have managed to wipe out indigenous cinema in many parts of the world- but not in India. There has always been some academic interest in Indian cinema, be it the movies of Satyajit Rai, Shyam Benegal or Mrinal Sen- but somewhere down the line the blinding glare of Bollywood has dominated.
“I think the importance of any field has to stem from its economic success and this will provide a spur for Bollywood to be studied in the west.”
Reflecting on his career as an academic and film maker in the US Jagmohan said: “I wanted to be a filmmaker so badly that I was willing to give up my tenure, and security of life. Even though my wife was expecting our first child, I quit my job not even knowing if I would get a film to direct. You have only one life to live-every year that goes by not following your passion is a year wasted.
“It was rough at the beginning and now, after 26 years in the business, Provoked is my 30th film.
“The films that are closest to my heart are the ones that have something to say. Films like Kamla – about women slavery in India; Bawandar (Sandstorm) about a rape victim’s fight for justice and Provoked addresses the issue of domestic violence- these three are described as my trilogy tribute to women.”