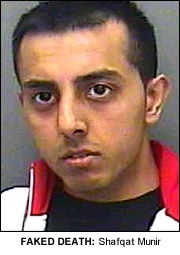 A MAN who faked his own death to avoid a number of speeding fines has been jailed for 12 months.
Father-to-be Shafqat Munir ordered a fake death certificate from Pakistan to avoid paying for his crimes, after fearing he would be disqualified from driving.
What Munir failed to realise however was that had he owned up to his actions he would have been fined £180 with nine points on his license.
As it was the 26-year-old waiter was jailed for 12 months and banned from driving for 18 months – even his own lawyer called his attempt to evade justice ‘pathetic’.
Preston Crown Court heard Munir was caught speeding three times in a matter of weeks in his Honda Civic on the M55 in Lancashire, Blackpool and in Rotherham.
After receiving a summons for the three speeding offences, he called the speed ticketing unit claiming to be ‘Rashid Hussain’.
He informed officials ‘Shafqat Munir’ had died in Pakistan years earlier and his family were distressed at the arrival of the summons.
He sent a fake death certificate in Urdu to officials to ‘prove’ the death.
But holes in his elaborate plan led to his downfall. After having the ‘death certificate’ translated police noticed discrepancies in the dates listed –most notably the date of the death came after the date the death was registered.
Now deeply suspicious, police traced a picture taken from one of the speeding camera’s and found Munir driving with his wife in the passenger seat.
When they called ‘Rashid Hussain’, he admitted he was in fact Munir.
During the trial Munir admitted he feared losing his licence saying he was responsible for taking his wife to a Leeds hospital for IVF treatment.
But jailing Munir for 12 months, Judge Andrew Gilbart QC said: “Interfering with the course of justice demands a custodial sentence, especially if there is a calculated plan to disrupt a prosecution by the production of a fraudulent death certificate.”