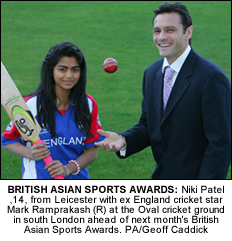 A HOST of British Asian sporting talent from the Midlands region are set to do battle next month at the British Asian Sports Awards (BASA).
The annual award ceremony recognises the impact young and old British Asian sports stars have made in the past year.
The award ceremony was officially launched earlier this week by former England cricketing ace Mark Ramprakash.
He was joined at the Brit Oval by a selection of the nominees including 14-year-old cricketer Niki Patel from Leicester, and Birmingham kickboxing champ Sunny Hira (25).
The duo will compete against 27 other nominees for a number of awards ranging from Young Sports Personality of the Year to Lifetime Achievement Award.
Other Midland-based nominees include cricketers Usman Shabir (15) and Ateeq Javed (15), both associated with Warwickshire County Cricket Club, and Leicester’s kickboxing champ Barinder Singh.
Speaking at the launch, Mark Ramprakash applauded the efforts of the British Asian Sports Awards in honouring talent from the South Asian community.
“When I was growing up in the UK, there was nothing like BASA to encourage more of us from the South Asian community to pursue a professional career in sport,” he said.
“However, this awards program is a fantastic opportunity to not only recognise the many sporting Asian stars this country has to offer but also support many more to come forward.”
Rajan Singh, one of the founders of BASA says:“This year’s award nominees come from a broad range of sporting fields from badminton to boxing, and prove that there are many talented British Asians making there mark in sport. However, it is likely that many of these promising individuals will go unnoticed. It gives me great pleasure to know that through BASA we are helping to nurture them, as well as advance the overall poor representation of South Asians in British sport.”
Over 800 VIP’s, including leading sporting icons, industry figures, national and international celebrities, are expected to attend the ceremony at the London Hilton on 16 February.

Have a look at LocalMilfSelfies. You will find a real difference in online dating sites

Sadaf lends an ear and gets rewarded!

Plans for a new city centre hotel are scaled back