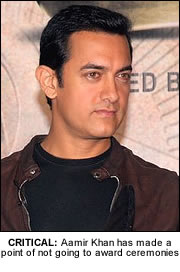 BOLLYWOOD director Sajid Khan has claimed award juries should snub fellow directing rival Aamir Khan after seeing him sweep the board at the 14th Star Screen Awards.
Khan, who was the brains behind last years summer smash ‘Heyy Babyy’, made the claim during an interview on the BBC Asian Network’s ‘Love Bollywood’ show.
Aamir Khan has a policy of snubbing award ceremonies and did not attend the Star Screen Awards in Mumbai last week despite his latest film ‘Taare Zameen Par’ landing a phenomenal 17 awards, , including Best Director, Best Supporting Actor and Best Story.

The film walked away from the ceremony with six awards – the highest by a single nominee.
But Sajid Khan, who hosted the event, said those organising award ceremonies should not honour Aamir knowing his lack of commitment in attending.
“Aamir is a very good friend of mine. He is a star par excellence but when he gives a statement out in the press that he is not interested in awards, then I think the awards also should show no interest in him,” Khan said.
“You are giving out all the awards to Taare Zameen Par, which, again see the point is, it deserves, and I’m not saying it doesn’t deserve. It’s a fantastic film, but you know that there is going to be no-one coming to take it.”

Khan also voiced his concerns for the industry after only three actresses were nominated for the Best Actress award.
He said: “For the best actress category you had just three names Aishwarya Rai, Tabu and Kareena Kapoor. Rightly deserving because all three of them are fantastic and all three of them were very good in Guru, Cheeni Kum and Jab We Met.
“But you can’t ignore a Katrina Kaif for a Namaste London or a Vidya Balan for a Bhool Bhulaiyaa.  I was donning two roles that day. One was the role of an entertainer of a host like Billy Crystal, and that was one role in which I was doing my job professionally.  The other role was that of a very concerned film industry member and a director who has made a blockbuster film in his first film.”