How Peter Kosminsky & Channel 4 got it right 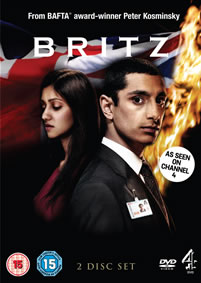 As Channel 4 began its huge publicity drive for ‘Britz’, community leaders in Bradford voices their disapproval. Understandably they didn’t want their Muslim-communities tarred with the ‘terrorism’ brush. But having watched the programme I wonder if their views have changed.
Peter Kosminsky’s Britz was far from the ‘fanatical Islamic terrorist’ story and by a long shot was the best drama I’ve seen on the small box all year. As a British Muslim I was sceptical about the drama when I came across it in a list of Channel 4’s autumn highlights earlier this year. Did we really need another fictional drama that would result in accusing fingers being pointed at ‘my’ community? Did we need more bigoted views that all Muslims were terrorists?
Thankfully, I was proved wrong. The story of Sohail (Riz Ahmed) and Nasima (Manjinder Virk) worked extremely well. With both sitting on opposite sides of the fence, it became clear to me I was left with the choice as to I would sympathise with come the end of the drama.
Wanting to ‘give back’ to his country, Sohail is recruited to MI5 as they bid to close in on operating terrorist groups in Britain. While he may seem anti-Muslim at the start of the programme (he makes fun of an old friend for dressing like a ‘f****n Arab’) he slowly realises no matter what his views, he is subjected to the same treatment as other Muslims. Arrested on his return from a judo competition, he encounters chilling racism after he friend is pinned up against a wall and called a ‘paki f**k’ by a police officer for simply questioning why they have been arrested. In a fit of anger just moments later he says, “this is part of the problem! And you wonder why people are radicalising!”
Despite his obvious frustration at having to spy on his own friends, his goal remains the same as he works to help MI5 in their fight against homeland terrorism. He feels no uneasiness over helping in the interrogation of a tortured man who happens to have grown up just a few streets away from his Bradford family home. And for Sohail everything comes to a head as he tried to intercept an attack on Canary Wharf. His story ends when he confronts the would-be bomber to find out it is his one and only sister, the same sister he thought he’d buried just weeks previously.
In part two we encounter Nasima, sister to Sohail and a medical student with a seemingly bright future ahead of her. She is driven to become a suicide bomber following the death of her best friend whose life is seemingly destroyed after being targeted under anti-terror laws (she is arrested, sent to prison and placed under a control order after buying packets of ground pepper). Frustrated by the way her fellow Muslims are treated and the lack of answers offered through political means of protest, she follows the path of the terrorist bomber. Her change in thinking is offered at the beginning of her story when she is angered by a leaflet seemingly urging Muslims to attend a talk at the University on fighting for the cause. Later she accepts the very same leaflet and attends the talk. She deliberately tells her parents about her black boyfriend knowing in their anger they will send her to Pakistan. It is in Pakistan where she makes contact with and eventually fakes her own death to join a terrorist training camp, coming back later and boarding a tube to Canary Warf with explosives strapped to her body. Kosminsky does not portray Nasima as the fanatical Muslim bomber. You can detect doubts as she prepares for her ‘task’. She questions why nobody told her she would be responsible for the deaths of children, and even makes a last minute phone call to her brother which goes straight to his voicemail. In the end however, she does accomplish her mission but not before staring into the eyes of her brother as she holds onto and eventually releases the detonator.
In an interview with the Independent newspaper in the days leading up to the airing of the drama, Peter Kosminsky denied the show would act as a tool in radicalising young British Muslims.
“British Muslims are fantastically angry and disillusioned,” he told the newspaper. “They are infuriated by a foreign policy that appears to be an attack on Muslims worldwide – a new Crusade – and a shockingly large series of security measures which seem to be aimed solely at them.” This forms the basis of Nasima’s story and answers the question posed by Peter in the drama – what drove this intelligent 20-year-old to strap explosives to her body.
While the drama may not have ticked everyone’s fancy, for some people, including myself, it was needed. Producers like Peter Kosminsky have the platform to tell this story because, realistically, what is the likelihood that ordinary British Muslims would be afforded the same publicity and airtime to tell the whole of Britain what we’re really thinking. Maybe now society should stop looking at Muslims and look at their own prejudices, their own bigotry, and the anti-terror legislation in place for an answer into why things like this happen.
Reviewed by Zakia Yousaf
Britz is released on DVD on Monday 5 November
Win a copy of Britz on DVD. Click here for more details.
Related Articles:
Peter Kosminsky’s Muslim dilemma
Britz – Pushing The Boundaries: Interview with Riz Ahmed & Manjinder Virk