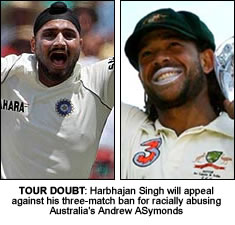 INDIA’S tour of Australia looks in doubt after a race row during the second Test in Sydney resulted in a three-match ban for Indian spinner Harbhajan Singh.
India said they will appeal against the ban and have refused to travel to Canberra where they will play a tour match on Thursday.
Harbhajan was banned by the ICC for allegedly calling Australian all-rounder Andrew Symonds a ‘monkey’ during an on-field confrontation after an official complaint by Australian captain Ricky Ponting.
Match referee Mike Procter said he was satisfied Harbhajan had used the word even though neither of the two umpires had heard the comment.
Procter said Harbhajan had “meant it to offend on the basis of Symonds’ race or ethnic origin”.
But the Board of Control for Cricket in India said they would be appealing against the “unfair” decision.
“The incident involving Indian off-spinner Harbhajan Singh and Australian all-rounder Andrew Symonds and the subsequent hearing by the ICC match referee and his conclusions are, to say the least, distressing,” they said in a statement.
“The Indian Board does not accept the findings of the match referee and has decided to challenge the unfair decision to suspend Harbhajan Singh as it deems it patently unfair.
“The Board will appeal to the International Cricket Council to review the decision of the match referee and suspend its operation till the appeal is disposed of.
“The Indian Board realizes the game of cricket is paramount but so too is the honour of the Indian team and for that matter every Indian.
“To vindicate its position, the Board will fight the blatantly false and unfair slur on an Indian player.”
If Harbhajan was to lose the appeal he would miss the two remaining Tests in Australia, and one further match.
India lost the second Test in an amazing match marred by poor umpiring decisions.
Symonds went on to make 162 not out in the first innings despite edging the ball to wicketkeeper Dhoni, Rahul Dravid was given out when the ball clearly knicked his pad, and Sourav Ganguly was dismissed on the basis of Ponting’s appeal.
Indian manager Chetan Chauhan hit out at the umpiring decisions, while captain Anil Kumble accused the Australians of not playing in the spirit of the game.
“Only one team was playing with the spirit of the game, that’s all I can say,” Kumble said.
“I’ve played my cricket very sincerely and honestly, that’s the approach my team takes, and we expect that from Australia as well.”
Chetan Chauhan believed India would not have lost if they had received 50% of the contentious calls. “Had some of the decisions, I would say 50% of them, were received in our favour, the result would have been different,” Chauhan said. “It really affected us. We’re not saying this because we have lost the game. It was for everybody to see.”
The two teams will meet for the third Test in Perth on 16 January.