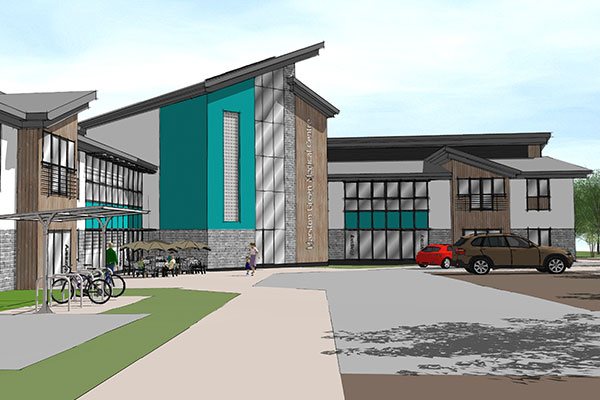 A new medical centre is to be constructed in Marston Green, despite fears that the scheme could set a dangerous example for green belt development. Hopes scheme will meet rising demand, but green belt land will be lost.

Solihull Council’s planning committee has this week given unanimous approval to plans to demolish Oliver House, in Ivy Lodge Close, and erect a purpose-built facility, bringing various services under one roof.

The centre will include 17 consulting rooms, an on-site pharmacy, gym and self-service cafe. It is estimated that the scheme will create more than a dozen new jobs.

Local GP Dr Victor Sagoo had said that the current doctors around the corner was “not fit for purpose” and the failure of the proposals put before planners could force the practice to move out of the village – leaving it without a surgery.

Bickenhill and Marston Green Parish Council said it understood the pressing need for improved health facilities, but had serious concerns about the scale of the building and the loss of green belt land.

Dr Sagoo – who has worked in the village for 17 years – had argued that the present practice, in nearby Chelmsley Lane, could not meet demand.

“It’s not fit for purpose and is highly reliant on on-street parking which we know is frustrating for our neighbours,” he said.

“We have been at full capacity for a number of years and with two neighbouring GP practices having closed down recently due to NHS pressures we have had to take on additional patients from far and beyond Marston Green’s catchment area.

“The application before you this evening is no passing whim or flight of fancy, we have been looking for land for the last ten years to build a much-needed new surgery.

“We are the only GP surgery in the village and if the proposed medical centre is not approved we will almost certainly have to move out of Marston Green and find land elsewhere … This would be devastating for us and also for our patients, who would have to travel to Chelmsley Wood or further on.”

Richard Cobb, speaking on behalf of the parish council, said it was widely recognised that the Chelmsley Lane practice was “very restricted”, but there were concerns about the impact of the new centre – said to be four times the size of the current premises.

“The very special circumstances which have been put forward by the applicant should not disguise the fact that this proposal intrudes significantly into the vital wedge of green belt open land,” he said.

“The parish council fear that this precedent will mean that more of that green belt will be sacrificed to housing and it will make it more difficult to defend the land at the rear of this medical centre, which will effectively be cut off from Coleshill Road.”

Cllr Richard Holt (Con, Blythe) – who previously lived in the village – said the plans were an opportunity to create a “state-of-the-art” facility.

“Looking at it – ultrasound, x-rays, scanning, orthotics, ophthalmology. It’s something to be proud of.

“Yes, I am a great defender of the green belt, I really do feel we have to protect it.

“But this is an example of very special circumstances.”

Cllr Diana Holl-Allen (Con, Knowle) said she “wholeheartedly” supported the plans and that the new generation of medical centres were helping meet the increasing challenges facing the NHS.

A similar health centre was officially opened in Balsall Common in 2012, on the back of concerns that the current surgery had become restricted and outdated.