Miss Bollywood UK to be held in Birmingham 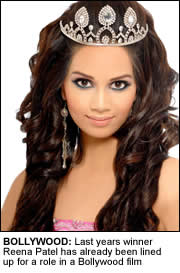 BEAUTIES across the country are being urged to enter this year’s Miss Bollywood UK.
The pageant will help launch the modelling career of the winner, as well as securing a part in a Bollywood film for the lucky lady.
Proving that dreams can come true, organisers have already lined up a Bollywood role for last year’s winner, Reena Patel, in Quick Slip Me a Bride, starring Bipasha Basu, former Eastender Ross Kemp and Britain’s Got Talent judge Amanda Holden.
The winner will crowned at a glittering ceremony in Birmingham later this year.
The man behind the pageant, Zia Choudhury, said: “Miss Bollywood UK 2010 will be about being an all rounder and making one’s dream come true by being crowned as Miss Bollywood.”
The competition is open to all, not just those of Asian origin.
Closing date for all entries is May 31.