Home News Pudsey Does Bhangra for BBC Children In Need 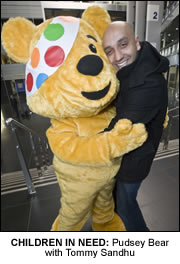 BBC Asian Network and Pudsey Bear have teamed up to host a free Bhangra and Bollywood Party for BBC Children In Need.
The event will take place at Birmingham’s Millennium Point on Friday 20 November.
The star studded line up will include legendary Bhangra artist Malkit Singh, rising star Jaz Dhami and Johnny Kalsi with the legendary Dhol foundation who will perform live at the event.
The event is part of Children In Need’s national charity extravaganza which will be broadcast on BBC One next Friday.
BBC Asian Network’s Tommy Sandhu said: “It’s going to be a massive musical extravaganza. We’ve got an amazing line up and we’re going to lift the roof off with our band of dohl drummers. Children In Need is all about getting children heard and what better way to do it than to make a whole lot of noise from here in the Midlands which will resonate across the UK.”
The event will broadcast live at various times during the BBC One’s networked show presented by Sir Terry Wogan.
Last year, thanks to the amazing generosity of the British public, a record breaking £37.8m was raised. This is currently being used to significantly enhance the lives of thousands of disadvantaged youngsters across the UK.
Tickets to the event are free and are available at www.bbc.co.uk/tickets  or by calling 0370 901 1227.