The sky’s the limit for Ajay 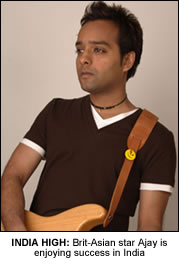 A BRITISH Asian singer has stormed the Indian music Top 10 with his debut album.
Ajay is a well know artist in Britain and his popularity is set to soar in India with his number eight charting position for debut album ‘Aaja Sajana’.
Famous for his stunning guitar work and self-penned hits such as Aaja Sajana, Kasam Se and Funki Dholi, the multi-talented performer now looks forward to a successful career as an international artist all brought about after being signed by India’s largest record label Tseries/YBR Records.
His 3 album deal with TSeries/YBR Records also includes recording tracks for future Bollywood movies.
Vinay Sapru, CEO of YBR Records, T-Series, said: “Ajay’s outstanding talents as an all round artist and live performer, mark him out as someone with huge potential in the sub continent. The success of his album is only the first step in a long and fruitful career.”
T-Series will promote and market Ajay Internationally as part of its Hindi non-film repertoire which includes artists Lata Mangeshkar, Adnan Sami, Sonu Nigam and Himesh Reshamiya.
Describing his new found Indian fame, Ajay said: “It’s a real honour to be part of such a legendary label and industry which gives artists the support they need. I’m looking forward to developing more solo material as well as collaborating with other TSeries artists.”
After a breakneck promotional tour of India, which included the Crowning Ceremony of the new Miss India, Ajay is set to return to India in November, for further promotional shows in Mumbai, Goa, Delhi, Hydrabad and Kolkata.