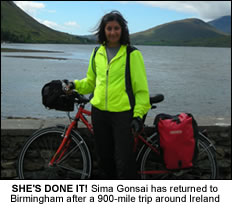 A BIRMINGHAM artist has returned home following an extraordinary 900 mile trip of coastal Ireland – on her bike.
Adventurous Sima Gonsai cycled completely alone whilst carrying a pack weighing a third of her entire body weight for six weeks.
She mapped an alternative Ireland inspired by stories and recommendations of those willing to join in with the adventure – some of whom she met en route in Ireland, whilst other ideas came from the Irish community right here in Birmingham.
For the six weeks of her trip, Sima cycled against all the elements, up mountains, along dual carriageways, braving gale force winds, 100kph speed limits, and miraculously, she didn’t get one puncture!
But the cycling was only half the work, having spent the morning travelling to a destination; she would spend the rest of the day getting locals involved with the project.

”I met so many wonderful people who were enthusiastic about the project,” Sima said on her return to Birmingham.
“People I met on route always said ‘you are very brave to be cycling all by yourself, don’t you get scared? The project had a huge response with the press following my story and people recognising me along the way; I would reach a village in the evening and the whole place would know who I was by the morning.”
Starting from Dublin and finishing in Belfast six weeks later, she pedalled 40 miles a day passing through many counties, cities, towns and villages, asking local Irish folk where to travel next.
Stopping at Wicklow, Waterford, Cork, the ring of Kerry, Clare, Galway, Canamara, Donegal, Derry and completing the grand tour in Belfast, Sima met an array of enthusiastic strangers.

Ireland is not well known for having a large Asian community, but Sima managed to secure two discount hotel rooms from Asian hotel managers in Spanish Point and Cushendall.
“It was the most unlikely place I would expect to see an Asian,” Sima said.

Her aim for the project was to create a portrait of Ireland that contrasts and compares memories, stories and experiences from migrant Irish communities in Birmingham, resident Irish communities and her own perspective as an artist from a family that migrated to the UK from India in the 1970s.

Sima’s adventures are now to be written into a book and made into a film, both outlining an alternative map of Ireland with anecdotes and stories from the Birmingham and Ireland communities made which will be distributed to people who contributed to the project.
“I am now writing my travel book which will include many of those I met that inspired and helped in making this adventure a success. I want to give back to those who willingly gave their time and friendship,” Sima added.