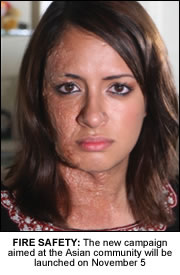 A HARD-hitting and emotive TV campaign to raise awareness of the importance of smoke alarm ownership amongst the Pakistani and Bangladeshi communities in the UK will be launched by Communities and Local Government next week.
Strongly supported by Fire Minister Parmjit Dhanda MP, the initiative, launching on Monday, aims to cut the number of fire-related deaths and injuries among key ethnic minority groups by highlighting the value of a smoke alarm and the impact of fire in the home.
The campaign, which is part of a wider outreach and engagement programme by local Fire & Rescue Services throughout England, is based on a clear understanding of the needs of the Bangladeshi and Pakistani communities and their lack of awareness about smoke alarms.
According to figures from the Survey of English Housing, ownership of smoke alarms is 10 percent below the national average among Asian communities.
Parmjit Dhanda said: “Research shows that there are a lot of misconceptions about smoke alarms and often even those that have them do not realise how important they are. A working smoke alarm can be the difference between life and death in a house fire.”
He added: “The research and statistics about the number of UK fires and how they are caused are chilling reading. This campaign is designed to highlight the causes of fire, the impact on the individual and their family and most importantly what the community needs to do to prevent fire and loss of life.
“There is no doubt that owning a smoke alarm can help save your life. It is a fact that people who do not have one are twice as likely to die from a fire. I hope the campaign will help members of the Pakistani and Bangladeshi communities understand how beneficial a smoke alarm can be and also how easy it is to obtain one. All people need to do is contact their local Fire and Rescue Service. However, it is just as important to check the smoke alarm regularly and make sure it is working.
“The message I would convey to the Pakistani and Bangladeshi communities is this: Get it, Install it, Check it…It could save your life.”