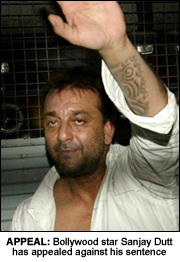 BOLLYWOOD star Sanjay Dutt who was jailed for six-years for buying weapons used in the 1993 Mumbai bombings is to appeal against his sentence.
The 48-year-old is currently being held in a high security prison in the Western Indian city of Pune.
He is the most high-profile name out of the 100 so far convicted in the blasts which killed 257 people.
He was cleared of conspiracy, but found guilty of illegally possessing a rifle and a pistol.
The actor, who spent 16 months in prison after his arrest in April 1993, was also fined Rs 25,000 by the special court.
“We have filed a petition seeking bail for Sanjay Dutt,” the actor’s lawyer Satish Maneshinde said. “We are also challenging his conviction.”
The petition, which said Dutt should be granted bail because he was “not likely to commit any offence while on bail,” urged the court to award him some form of punishment other than jail.
The star, famed for his more recent roles in the comedy series Munnabhai, has always protested his innocence against the charges.
Fellow Bollywood stars have also voiced their support for the actor.
Reports have suggested a campaign backed by some of the industry’s stars has been cancelled on the insistence of Dutt’s sister Priya who feared it could jeopardise his case.