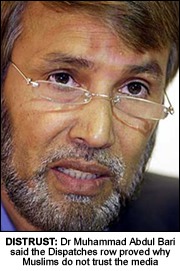 FORMER Guantanamo Bay detainee Moazzam Begg has called for the detention facility to close down as Prime Minister Gordon Brown reversed the government’s policy and called for the release of five British residents held at the camp.
The men, Shaker Abdur-Raheem Aamer, Jamil el-Banna, Omar Deghayes, Binyam Mohammed al Habashi and Abdulnour Sameur, are not British citizens but lived in the UK before they were detained.
It is believed the release of another non-British resident Bisher al-Rawi earlier this year at the request of the government led to the recent developments.
Calls for the men’s release had been highlighted by human rights organisation Cageprisoners.com. The group’s spokesperson and former Guantanamo Bay detainee Moazzam Begg welcomed the government’s call for their release.
He also stressed now was the time to close the detention facility.
Writing in the Guardian he said: “The announcement that the British government has formerly requested the repatriation of five British residents held in Guantanamo to the UK has been met by their family members and supporters with a sense of profound elation and relief.
“After the return of Bisher al-Rawi earlier this year, the UK resident for whom the government did make representations – after four years in Guantanamo – when it was revealed that he’d been cooperating closely with MI5 prior to his incarceration, the insistence that the UK could not advocate on behalf non-UK nationals became painfully absurd.”
He added: “But for me and many others, the fight to have the Guantanamo prison facility shut down and its occupants returned home continues. In the meantime, we welcome the government’s move and wait eagerly for the prisoners to be reunited with their families.”
The decision by Gordon Brown to officially request the return of the men marks a change in policy in dealing with detainees at the base. Under Tony Blair the government refused to call for the men’s release saying they were not British citizens.
Human rights group Liberty also welcomed the UK government’s request. Legal director James Welch said: “This change of policy is extremely welcome, especially if it signals a bigger change of approach on both sides of the Atlantic.
“Surely the US and UK governments need no further evidence that internment, kidnap and torture have been completely counterproductive in the struggle against terrorism.
“It’s high time that the special relationship returned to its original values of defending liberty rather than degrading it.”