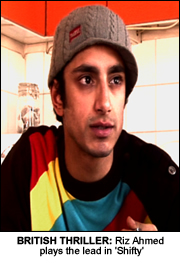 ASIAN actor Riz Ahmed will return to our screens later this year in the British urban thriller ‘Shifty’.
The star of Channel 4’s critically acclaimed docu-drama ‘The Road to Guantanamo’, takes the lead in the film from debutant director Eran Creevy.
Ahmed takes the title role in a screenplay charting an action packed 24 hours in the life of a young Asian crack cocaine dealer.
The sudden return home of his best friend sets in motion a chain of events which sees Shifty’s life quickly spiral out of control. Stalked by a customer desperate to score at all costs and with his family about to turn their back on him for good, Shifty must outrun and outsmart a rival drug dealer, played by Layer Cakes’ Jason Flemyng, intent on setting him up for a big fall. As his long time friend Chris, played by Daniel Maysconfronts the dark past he left behind him, Shifty is forced to face up to the violent future he’s hurtling towards.
The film, backed by Film London, began shooting earlier this month and will continue for three weeks on location in Borehamwood.
Fans will also see Ahmed on Channel 4 later this year in Peter Kosminsky’s ‘Britz’ which explores a Muslim family’s response to events in Iraq.
Watch this space for more news!