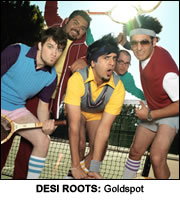 HIT American band Goldspot will make history this weekend when they release an English and Hindi version of their latest single ‘Friday’.
The Bollywood influenced single ‘Friday’, featuring the vocal talents of Indian lead singer Siddhartha Khosla and musical arrangements by music legend AR Rahman, is the second track to be taken from the band’s much loved debut album ‘Tally of the Yes Men’.
The ‘multi-cultural’ band is made up of five members who bring a range of eclectic sounds to the band from India, Guatemala, Egypt and the US.
And tackling the Hindi version of ‘Friday’ is front-man Sid Khosla who admits listening to golden legends such as Kishore Kumar and Mohammed Rafi as a child was one of the inspirations behind the move to create the Hindi version.
“I’ve had great fun writing the Hindi version, with transatlantic calls to the whole family, to make sure the translations were right”, Sid said.
“For me, the highlight was really the trip to India to work with AR Rahman – he added his unique magic to both the English and Hindi versions, giving it that melody and richness that I associate with classic Hindi film music.”
The English version of the song has already found its way onto the mainstream airwaves with BBC Radio 2, VH1, The Box, Hits and MTV already adding it to their playlists.
The Hindi version of ‘Friday’ will be available to download from 6th August 2007