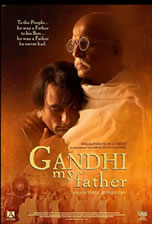 Director: Feroz Khan
Cast: Darshan Jariwala, Akshaye Khanna, Bhumika Chawla, Shefali Shah, Daniel Janks
Gandhi has always been compelling, complex and strangely contemporary.
Sir Richard Attenborough introduced Mahatma, the great soul, to the West through his bio-epic Gandhi.
Everyone knows about Mahatma Gandhi’s role in the Indian freedom movement and as a social reformer. But there are large gaps in our knowledge of Gandhi as a person and a family man, particularly the turbulent relationship with Harilal, his eldest son.
Gandhi My Father, is the true story of one of the most important figures of the 20th Century and the failed relationship with his son.
Forced to live in the shadows of a great father, Harilal tried to seek an identity of his own. His aspirations to study law in England in order to become a barrister and help his father were discouraged by Gandhi. Instead, Gandhi insisted that such ambitions and a normal family life should be sacrificed for the larger good of society. Unable to accept his father’s wishes, Harilal rebelled, tried to stand on his own two feet but failed. He roamed the streets of India like a beggar, converted to Islam and eventually returning to Hinduism.Finally, five months on after Gandhi’s death, an alcoholic Harilal dies a destitute, in a Bombay hospital. Set against one of the most politically turbulent times in India, this moving drama focuses on the intensely personal story of a father struggling to resolve the destinies of his country and that of his son.
Not to be forgotten is the role of Gandhi’s wife, Kasturba, who was caught between the traditional, unquestioning loyalty of a Hindu wife to her husband and her love for their son.
This thought provoking drama is based on the play Mahatma v/s Gandhi.
The film is directed by veteran theatre and cinema actor, Feroz Khan. He has combined his talents as a writer and director with the production skills of Bollywood star Anil Kapoor, to create the most heart rending film of modern times. Releasing in the UK cinemas by EROS International, Kishore Lulla, its Chairman & CEO said, “Gandhi My Father marks a milestone in the 30 year history of Eros International.”
He continued, “this colossal piece of filmmaking, incomparable by anything that has come before, makes its debut on the global platform of cinema, and we are exceedingly proud to take ownership of the distribution rights of a film that will make its own mark in history.”
Gandhi My Father is releasing in the UK cinemas on 3 August 2007. The film is in Hindi language with English subtitles.