The Cricketer with Mansoor Ahmed 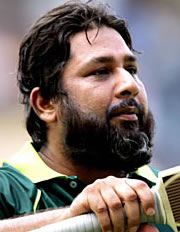 All the signs are that Inzamam ul Haq will soon be squeezed out of Pakistan Cricket team even though he wants to play another year or two in longer version of the game. He is still the best Pakistan batsman in my opinion with no obvious candidates to take his place. However, its seems that the new bunch of selectors are intent on curtailing his career. Inzi has not been given a new central contract and his name was omitted from the list of 30 probables for Training camps.

If Inzi is banished from the International scene, he certainly won’t be the first Pakistani great to be treated this way. Instead of giving players an opportunity to retire gracefully, like the Australians, who always allow their senior players one last test at each ground, the Pakistani Cricket Board makes a mockery of them. You simply have to look at how the likes of Waqar Younis, Wasim Akram and Saeed Anwar ended their careers. What the PCB ought to do is to have a chat with Inzi and agree one last series, in Pakistan, where Inzi could play his last test matches, culminating in a graceful send off at his hometown of Multan. The crowds will have a chance to pay their final tribute to Inzi and he will have a more dignified and satisfying retirement.

It also seems that Rana Naved has played his last match for Pakistan, rather acrimoniously. He too has not been offered a central contract and will probably be left out of Twent20 World Cup. If true, this will be another sad end to a short but bright career of one of the most passionate and proud Pakistanis. He burst onto the scene when Bob Woolmer took over the reins and performed admirably in the absence of big guns in Australia. It was not long ago that he was Man of the Series against West Indies. I sincerely hope we’ll see more of him, particularly in the shorter version of the game.