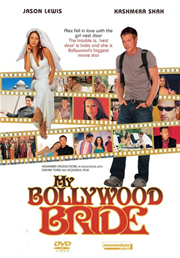 What happens when Hollywood decides it’ll try its hand at a Bollywood-style story? The answer is ‘My Bollywood Bride’, a fantastic blend of boy-meets-girl, boy-loses-girl, boy-finds-girl, boy-ends-up-with-girl! (Phew!).
A ‘Best of Fest’ winner at the Palm Springs International Film Festival, the film tells the story of Alex, an LA writer, played by Jason Lewis of Sex in the City fame, and Reena, played by Indian actress Kashmera Shah, a Bollywood actress on vacation in sunny California.
After a chance meeting the duo spend Reena’s vacation falling in love. But when she suddenly decides to return to India, Alex realises she’s too good to let slip through his fingers.
Following Reena’s advice to follow his heart and realise his destiny Alex turns up in Mumbai to find ‘his’ Reena. But he’s in for one hell of a shock. Staring down at him from one of Mumbai’s million plus billboards is ‘his’ Reena, although to every Indian in the country she’s ‘their’ biggest Bollywood actress! And not only that, but the girl Alex has fallen in love with is scheduled to marry a big Bollywood producer at the request of her parents at any time. Can Alex save the day and walk his own Bollywood queen down the aisle before anyone else?
To find the answer, you have to watch the film and we guarantee you won’t be disappointed.
Both Jason Lewis and Kashmera Shah deliver fantastic performances to bring about a film which provides the perfect ingredients to its Bollywood tale – romance, action and dance sequences. The film, you’ll be surprised to hear is somewhat based on the true life story of the films writer/producer Brad Listermaan whose real-life wife is none other than the female star of the film Kashmera Shah.
And it is this which makes the film a winner.
My Bollywood Bride is out to buy on DVD on April 16.
Win a copy of My Bollywood Bride on DVD!