Home News Man wanted for failing to appear at court 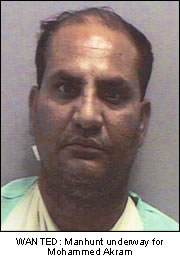 A MANHUNT is underway after a man wanted in connection with physicallly abusing his former partner failed to turn up in court.
Mohammed Akram, 37, is on the run after failing to turn up for his sentencing hearing at Leicester Crown court.
He was found guilty of GBH, two counts of common assault and using violence to secure entry following a domestic incident at the home of his ex-partner in July last year.
Detectives hunting Akram believe he could be in Leicester or Birmingham and are appealing for anybody with information to his whereabouts to contact them.
Detective Constable Paul Feeney from Central CID said: “This was a nasty domestic incident for which Akram should now be starting a custodial sentence.

“It’s important that Mohammed Akram pays for his crimes against his former partner and we’re very keen to see that she gets justice knowing he is no longer at liberty.”
Anyone with information about Akram’s whereabouts is asked to contact DC 321 Paul Feeney from Central CID on 0116 222 2222, follow the instructions to leave a message for a police officer and when prompted key in the officer’s identification number 0321. Alternatively contact Crimestoppers, which is free and anonymous on 0800 555 111.