‘King Khan’ waxwork to be unveiled on April 3 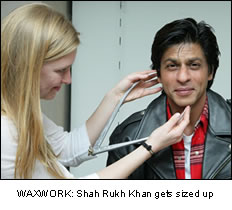 WHEN Madame Tussauds revealed another Bollywood addition in the name of Shah Rukh Khan would grace the halls of the famous museum, bosses at the top tourist attraction didn’t quite expect the sort of interest the move would generate.
The tourist attraction have revealed they have been inundated by Shah Rukh fans across the whole of Europe pressing them to reveal the exact date he will visit the London attraction to unveil the waxwork model.
And this month they finally confirmed the Bollywood star himself will appear at the tourist attraction on April 3.
While his fans get busy making plans to get down to the unveiling, the star himself said it was a “lifelong dream” to be immortalised in wax.
“It has been a lifelong dream since I visited the attraction as a child to be immortalised in wax and meet my very own Madame Tussauds double”, he said.
“This is truly a great honour; I was delighted to be involved in the whole creative process and can’t wait to see the finished figure for myself.”
Madame Tussauds visitors will be able to pose alongside Shah Rukh’s figure and become part of their very own Bollywood film poster.  He will join figures of fellow Bollywood greats, Amitabh Bachhan and Aishwarya Rai.