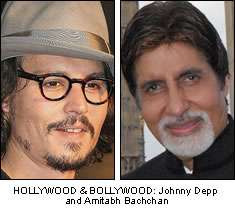 We’ve been asking the question for years, just when will two major stars from Hollywood and Bollywood come together in the same film? Drum roll please because we can reveal that time has finally come!
Hot-shots Johnny Depp and Amitabh Bachchan are all set to star in Mira Nair’s next film ‘Shantaram’.
Based on the life of Gregory David Roberts whose book of the same name details his escape from an Australian prison to Mumbai and his relationship with the city’s powerful mafia don’s.
Reports suggest Depp, who has recently enjoyed huge box office success with his Pirates of the Caribbean trilogy, will play the role of Roberts with Bachchan taking the role of a kind-hearted mafia boss.
Depp in fact approached Nair himself to take on the project.
“Johnny Depp is such an extraordinary human being and an extraordinary actor and he embodies so much what Shantaram is and so when he asked me to direct him it was obviously a great honour and challenge for me”, Nair told Retuers.
The film will be shot in Australia, China and India and will start shooting in November this year.
The screen adaptation will show how Roberts, a convicted Australian bank robber and heroin addict, escapes from prison and flees to India where he attempts to re-build his life. Whilst in India he is forced to deal with the Mumbai mafia but later decides to help slum-dwellers and starts a health centre that provides free medical facilities to the poor. It is here where he befriends Kadar Bhair, played by Bachchan, who becomes his mentor and guide.
Before Nair can get her hands on the project, she has to finalise her current film ‘Namesake’ for its India release.