Think football and images of David Beckham or Thiery Henry spring to mind. Narrow the search to British Asians in football and the likes of Micheal Chopra, Zesh Rehman and Harpal Singh jump to the top of the list. But where would your mind wonder if we narrowed the search further to British Asian Women in football? It may just draw a blank. While the beautiful game has been criticized in the past for the lack of opportunities on hand to male British Asian footballers, prospects for their Asian counterparts may seem all to distant. But in quiet corners in Birmingham and London a number of British Asian females are taking up the challenge to be a part of Britain’s biggest sporting love.
In this special 3-part feature series we speak to four women, all British, all Asian and all with a love of football.
Those women are Jaskirt Dhaliwal, a budding photographer who has bagged a number of awards for her cutting edge football-related photographs, Aisha Ahmad and Ayesha Abdeen, members of the British Muslim Women’s Football team who took part in Iran’s 2005 women’s Islamic Games, and Rimla Akhtar, the brains behind the Muslim Women’s Football Foundation based in London.
All disclose what they think of current opportunities for British Asian women in the game, as well as revealing their own personal devotion for the game. 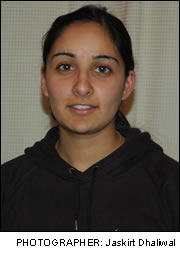 PART 1
Jaskirt Dhaliwal, Photographer Birmingham City Ladies
“From what I’ve seen in women’s football, only one British Asian female in the top flight that I know of (Anisha Bateman), tells a story in itself”.
Jaskirt Dhaliwal is an award winning photographer whose love for the beautiful game has taken her to playing fields of Birmingham City Ladies. Her photography has led to awards galore, most recently the Photo Image Council competition which gave her the opportunity to present her collection to fellow photographers.
Here Jaskirt reveals what led her to the lens, and why she believes generational attitudes within her community are changing towards the inclusion of British Asian women in football.
What, in your opinion, are the challenges facing British Asian women in football?
I think first and foremost British Asian women need to participate more in sports, not just football. That in itself is a challenge because of cultural factors, and even more so by the fact there is barely any coverage on British Asian female sports players in the British Asian press let alone mainstream media which encourages more British Asian females to participate in football and sport in general.
There is a huge amount of publicity for Asian men in sport, particularly in Asian based media, and I think it’s brilliant that there are Amir Khan’s and Michael Chopra’s but I think there also needs to be more coverage of British Asian female sport players like Anisha Bateman (Blackburn Rovers player/care taker manager) and Isa Tara Guha (Berkshire and England cricket player (she was part of the Ashes winning team))
Another big challenge facing British Asian women to play football is at home, as there is still an attitude that women know nothing about football, let alone being able to play. And of course there are still questions over whether parents find it acceptable or are happy with their young girls playing football.
I think from what I’ve seen in women’s football, only one British Asian female in the top flight that I know of (Anisha Bateman), tells a story in itself. There’s either not enough British Asian females playing or if they are then they are not finding the right routes into clubs to progress. In my experience playing football and being involved in women’s football now as a photographer and match report race or ethnicity definitely is not an issue within the game.
In what ways are cultural factors to blame for the lack of Asian women in sport in general?
I think it’s a huge factor. I don’t think Asian cultures encourage Asian women enough to participate in sports from a young age. I was very lucky in the sense that my parents always supported and encouraged me to play sports and join clubs, but I don’t think that’s the case for the majority. It tends to be that girls are encouraged to learn how to cook and clean as a past time rather then play sports.
I also think that the way Asian cultures are, with males on the whole being perceived as superior, there is a lack of encouragement and support for young British Asian females to start or continue playing or getting involved in sports. I think my generation are changing this attitude though, or at least I hope so! 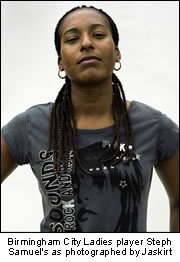 How did you get involved as a photographer in women’s football?
I was exploring ideas in photography about identity, and one thing that struck me was my own passion for football. At the time (October 2005) I had begun photographing action shots of Birmingham City Ladies for match reports I wrote on BBC Birmingham Online.
And what really grabbed me was the identity of these female footballers, how they played football in the Premier Division of women’s football and for England, but also studied at university, had full time jobs as teachers, fitness trainers, secretaries etc.
While male footballers are ranked as celebrities in a commercial and corporate world where the media waits for new headlines, the exact opposite is true for these female footballers. Female football players have no recognition, most have to pay to play and it is very much at grass roots level. It is played for the love of the game and these women have full time jobs, go to university and still pull on the shirt for club or country and in some cases both.
I then entered a competition with the Photo Imaging Council on a proposal about female footballers, and won! This enabled me to travel the country and photograph different teams and players, to explore this body of work further.
The end result for the exhibition is 12 portraits of female footballers in their normal clothes against plain backdrops, with text underneath, so initially when you look at the photographs they look like normal girls/women (which they are) and then after reading the text you realise that some also study and play international football. If that was an male England player I’d photographed in this style you would instantly know, and this fact only goes to highlight the lack of recognition and coverage of the biggest female sport in England.
With the portraits there is 8 landscape photographs, 5 of the simple pitches which show football at grass roots level, which women’s football is essentially, and 3 of huge stadiums, to show the comparison between the simplicity of women’s football and the business entity that male football has become.

Do you think your ethnicity has ever impeded you in pursuing your love for football?
Definitely NOT! I’ve always had a huge passion for football, and the only thing that has ever impeded me from pursuing it is injuries. I’ve had three knee ligament operations since I was 16, and those continuous injuries mean that I physically couldn’t play for years, but thankfully I can play now, although not at the level I would have liked to when I was a kid, but something’s definitely better then nothing!
Like I said before, my parents always supported me and encouraged my enthusiasm to play. I did used to get a lot of teasing from my uncles when I was younger, but when I used to nut meg them it soon shut them up! If anything the male dominated culture I live in only spurred me on further to play!
Where did your interest in football come from?
For as long as I can remember I have been playing football, probably first when I was at infant school. And I clearly remember my first major tournament, the World Cup USA 1994, with players like Maldini and Roberto Baggio how could I not be inspired! From then on I was hooked. I used to literally live for football! I played for various clubs and schools from when I was 7 or 8 years old, and my passion and love for the game has never left me since!
You recently won the Photo Imaging Council competition. How did it feel to have your work recognised?
Phenomenal, the opportunity the Photo Imaging Council have given me is huge and I really thank them for that. More then that though I really hope that by winning this award I can publicise and highlight just how fantastic women’s football is and in particular those involved in it because it really is football back to basics, people being involved for no other reason then loving the game. What football should always be about.
How far will you pursue your love for football?
Well I’m still rehabilitating from my last operation so I’m taking it steady at the moment, but as soon as I’m fit and able I do want to start training and playing again. Other then that I am aiming to continue my body of work on female footballers and I hope to photograph more teams and players. I really hope I can continue to be involved in football on a professional level too in radio and/or TV.
In Part 2 of British Asian Women in Football…
“I am proud to be able to play for my country and being a member of the squad. It’s great that Muslim women can represent their country doing the things that they love”
We speak to players Aisha Ahmad and Ayesha Abdeen who took part in the 2005 Women’s Islamic Games in Iran for the British Muslim Women’s Fusbal Team.
Coming soon on www.theasiantoday.com, and available in the April issue of The Asian Today