Bollywood star vows to give up smoking after scare 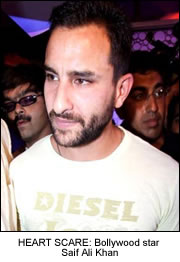 BOLLYWOOD STAR Saif Ali Khan vowed his smoking days were well and truly behind him after he was rushed to hospital suffering from chest pains.
The 36-year-old said he had given up the dirty habit for good after being told by doctors another cigarette could trigger the same scare.
The Bollywood actor was practising his performance for the Stardust Awards when he complained of pains.
He was rushed to hospital and spent more than a week as doctors battled to contain a blood clot on his heart.
Now discharged and recuperating at home, the actor said he had made important changes to his lifestyle.
“I’ll have to take it easy for a while. Nothing strenuous and certainly no smoking any more… In fact, my doctors told me my condition was brought on entirely by smoking. It causes deposits in the artery, which caused that clot. I’ve decided to quit smoking completely,” Saif told IANS.
“It’s been a time of revelation for me. Though I came out unscathed, this hospital experience served up a healthy warning for me. I need to correct a few things in my life, mainly the smoking”, he added.