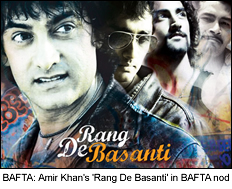 AMIR KHAN will have a double chance of bagging himself an honour from the Western world of media after his film ‘Rang De Basanti’ was nominated for a BAFTA award.
The film, which will be India’s entry for the Oscars, will go up against Mel Gibson’s highly acclaimed ‘Apocalypto’ in the foreign language category.
The awards, popularly referred to as the British Oscars, will be held on February 11 in London.
The film has already caught the imagination of Indian film goers – bagging eight Screen Awards held recently in the country.
Reacting to the nomination, producer Ronnie Screwala of UTV said, “This BAFTA nomination is yet another affirmation of the fact that RDB is a film that transcends all boundaries of ethnicity and nationality and appeals to the basic humanity in all of us.”