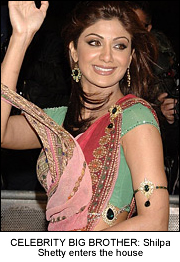 CELEBRITY Big Brother has found itself at the centre of a huge racism row after more than 3,500 viewers complained to TV watchdog Ofcom about the treatment of Bollywood star Shilpa Shetty.
Complaints of alleged racism were made to the media watchdog following a number of incidents in which Shetty was singled out by housemates Jade Goody, Danielle Lloyd and Jo O’Meara.
Channel 4 has revealed it has received a further 1,500 direct calls and e-mails making the show the most complained about in UK television history.
Viewers believe the 31-year-old is being targeted by the trio because she is Indian.
Goody’s mother, Jackiey, frequently clashed with Shetty during her stint in the house and while refusing to pronounce her name properly referred to her as “the Indian”.
There was further speculation after Channel 4 bleeped out a word during a conversation between Goody and her boyfriend Jack in which the later goes into a foul mouthed rant against the Bollywood actress.
Some media agencies have reported that Jack called Shetty a ‘f****** Paki’ but the broadcaster has denied this.
More recently when Shetty tried to console Lloyd after the eviction of tabloid journalist Carole Malone on Friday night, the women were unimpressed. “She makes me feel sick. She makes my skin crawl,” said Goody, with Lloyd adding: “She’s a dog.”
And there was further torment for Shetty following her decision to cook roast chicken for the group yesterday.
O’Meara refused to eat the chicken saying a previous curry cooked by Shetty was undercooked and had given her an upset stomach.
Shetty ended the day in tears after the trio took every opportunity to have digs at the star about the chicken.
At one point Lloyd remarks “Perhaps that’s how they cook chicken in India”, to which O’Meara replies “maybe that’s why they’re ill all the time”.
Proving that viewers weren’t overreacting to what they’re seeing on the show, former Steps front man Ian ‘H’ Watkins told Big Brother he was unhappy at the way Shetty was being treated.
Whilst in the diary room he said he believed Shetty was being bullied and that the house was “turning into that film – Lord of the Flies.”
“Were they bullying Shilpa last night?” Jermaine Jackson asked him yesterday.
“Yeah,” Watkins replied. “I’m not playing those games. I’m not going to be part of it.”
But evictee Carol Malone said she did not believe Shetty’s treatment was down to racism.
Speaking to the BBC Asian Network the journalist said the Bollywood star was simply a victim of her own beauty.
“Shilpa is too good looking for her own good”, she said, adding the three girls were just exhibiting signs of girly rivalry and shouldn’t be worried about.

“She’s an incredibly powerful and beautiful woman. She is a very strong, woman and can handle it. I spoke to her about it when I was in the house.

“Shilpa feels that she represents the Indian/ Asian community and doesn’t want to let them or herself down by retaliating. She’s a very dignified woman and she doesn’t want to lose it. That’s why she’s desperately trying to keep it all together”.
The Sun newspaper today reported Jade had been dropped by an anti-bullying charity she has supported for the past two years.
Act Against Bullying said her treatment of Indian beauty Shilpa was “unforgivable”.
A Big Brother insider told the Daily Mirror newspaper: “It’s the spiteful girlie gang mentality. They’re egging each other on. Shilpa is a graceful, eloquent, intelligent woman who can hold her own and they can’t handle that.

“If producers thought there was abuse, bullying or racism going on, they would take a very serious view on this.”
Related Articles:
Bolly Babe getting flirty in BB house!