A story of human relationships unfolds in this family drama 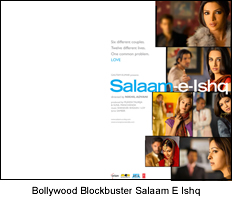 Director: Nikhil Advani
Cast: Salman Khan, Priyanka Chopra, Anil Kapoor, Juhi Chawla, Akshaye Khanna, Ayesha Takia, John Abraham, Vidya Balan, Govinda, Sohail Khan, Perizaad Zorabain, and Karan Johar
Tehzeeb (Vidya Balan) wakes up one morning to find a small diamond pendant by her bedside. This is an anniversary gift from her husband, Ashutosh (John Abraham). They had eloped and married two years ago.
Struggling to make ends meet, they work for a television news channel. She is a field reporter and he is a film editor. Their love is put to the test when Tehzeeb is involved in a tragic accident.
Then there is Raju (Govinda) who has been a taxi driver for the past 15 years from his home in Chandni Chowk to the New Delhi International Airport.
He has been waiting for Stephanie, his blonde dream girl. Life changes when he finally meets her but Stephanie has come looking for Rohit Chaddha, her boyfriend.
Vinay Malhotra (Anil Kapoor) wakes up in his picture perfect suburban London home every morning.
He is cared for by his perfect wife Seema (Juhi Chawla) whilst his well behaved daughters kiss him goodbye every morning.
He goes to his London PR job and returns home daily but things are about to change.
Vinay meets the not so perfect Anjali (Anjana). Unconventional, over-confident and extremely determined, Anjali comes from a world that Vinay only dreams of.
This is the world where every modern single girl living in London gets what she wants and Anjali wants Vinay Malhotra.
Kkamini (Priyanka Chopra) wakes up to another scandal in the morning newspapers. The most sought after chorus girl in Bollywood cannot help but get involved with all sorts of problems with the media.
These are the problems that she blames herself for not getting the heroine roles.
But things are going to change because she has devised a plot to change her image in the media, the public eye and most importantly the big producers of Bollywood.
A plot that will propel her from a chorus girl to number one heroine but the only thing that she has not anticipated is Rahul (Salman Khan).
Shiven (Akshaye Khanna) wakes up to a nightmare. The most eligible bachelor in New Delhi is engaged to get married in the next 10 days.
When he suddenly realises what he is getting into, he decides to break off his engagement
And he does so by hurting his fiancée, Gia (Ayesha Takia), in the process as he gets his freedom back.
Soon with every passing day, with every agonising hour he begins to realise that without Gia he is suddenly and completely incomplete.
Rustom Dastoor (Sohail Khan) is a simple lower middle class Parsi couple. He wants to spend the rest of his life with his newly married wife Dolly Dastoor (Perizaad Zorabian).
He wants to spend every hour fulfilling the lust that has been building up within him all these years.
But things are going to change because no matter how and where Rustom tries to fulfill that burning desire something goes wrong.
Rustom and Dolly are thrown into a series of events that become tragically and comically almost fatal.
Salaam E Ishq is a film based on various relationships and how these affects the one concerned.
Directed by Nikhil Advani, this film is already generating tremendous interest with the UK audience. Wait for its release very soon.