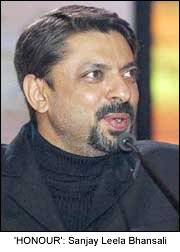 He is known as Bollywood’ most extravagant director producing films with lavish sets and extravagant blockbusters – now Sanjay Leela Bhansali has been given the honour of producing an opera in one of France’s leading opera houses.
His last big-hit blockbuster movie, the period drama ‘Devdas’ was the reason behind the Theatre du Chatelet’s appraoch to the leading star, the Times of India reported.
“It’s an honour”, he said after news of his impending opera was revealed.
“It’s a very exhilirating and exciting prospect to use my operatic vision on stage. I’m already very nervous. It’s a very lavish production, involving a huge cast and production values,” he added.
Bhansali will join the likes of Yimou Zhang, director of ‘House of Flying Daggers’, and Woody Allen in producing operas for the theatre.