Win a copy of Mischief Nights! 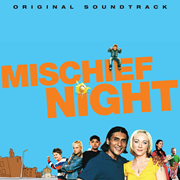 If you thought the revolutionary Asian music scene had met an untimely death then think again. Believe it or not, the likes of Danish outfit Outlandish, Nitin Sawheny and even Raghav are still at the top of their game and it proves to be the case on the soundtrack for Brit-Asian film Mischief Nights.
While Mischief Night is a humorous feel good film about the divide between the Asian and white communities in Leeds, director Penny Woolcock apparently wanted an unconventional score for the film so she turned to hot Radio 1 DJ’s Bobby and Nihal to compile a soundtrack that would reflect the tone of the film.
Juggy D, Mentor Kolektiv and UK Apache provide the best in UK urban talent, while Outlandish and Raghav are the pick of the non-Brits. If you’re taking a look at the tracklisting and have the feeling you’ve heard it all before then how does the Asian version of Gloria Gaynor’s ‘I will survive’ sound for you? Usha Uthup provides the vocals for a track that is definitely the highlight of this soundtrack!
Mischief Nights is a must-buy album for 2006!
Tracklisting:
1. Juggy D – Dil De Rani
2. Ges-e – Streets Of Basra
3. Outlandish – Aicha
4. Oojami – Aicha (T.G.U mix)
5. Aphrodite – Rip it Up
6. Zahid – The Gaza Strip
7. Lethal Bizzle – Uh Oh
8. Jungle Brothers – Jungle Brother (Urban Takeover mix)
9. Raghav – Bad Bad Bad
10. John Holt – Riding for a Fall
11. Long Gawacha – Babli (Desi Mix)
12. Mentor Kolektiv – Pasand
13. Swami – Desi Rock
14. Uk Apachi & Shy FX – Original Nutter
15. Usha Uthup – I will Survive
16. Nitin Sawheny feat Raghav – Seasons
WIN A COPY OF THE MISCHIEF NIGHTS SOUNDTRACK!
We have 5 copies of the Mischief Nights album to giveaway!
To be in with a chance of winning all you have to do is answer the following question:
Canadian music star Raghav reached Number 7 in the UK charts in 2005 with which song?
Is it:
A)    Angel Eyes
B)   I Got no Eyes
C)   Eye Spy
If you think you know the answer, send your name, address and contact number to:
Mischief Nights Soundtrack Competition, The Asian Today Newspaper, PO Box 13544, Birmingham, B11 9BZ
Alternatively e-mail your answer to zakia@urbanmedialtd.com
Closing date for entries: 1st January 2007
Winners will be chosen at random and the Editor’s decision is final.
This competition is now closed. The winners are Preena Makwana, Aarti Sondagar, Yasmin Rahman, Tasnuka Islam and Nisha. Your prizes are on their way to you!