Home Interviews I am really proud of Kabul Express 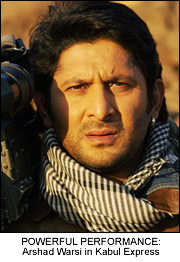 Arshad Warsi may have risen to the heights of Bollywood playing Sanjay Dutt’s sidekick ‘Circuit’ in Lage Raho Munnabhai, but his latest film has proven he is no one-hit wonder.
Starring alongside John Abraham in Kabir Khan’s Kabul Express, Warsi’s performance as a journalist in post-Taliban Afghanistan has led to rave reviews.
We spoke to the 38-year-old about his role in the film and on whether he thinks his adoring Munnabhai followers will take to him in his latest role.
You have always been hounded by the media so what was it like playing one of them?
I was just playing the role, there was never an incident in the film where one was questioning people, or there was an interview happening, so it didn’t feel that way. I felt a little different because of the camera in front of my face, but there was never much of a difference actually.
You are now so well known as Circuit so do you think people will accept you in this completely different image?
I think so, I think Circuit is just a character that I played in one movie and everybody loved it so much that therefore it stuck in people’s head, but I have to keep continually doing films. I feel an actor only gets accepted or not depending on the work he does. So if I have done a good job, people like my work. I’m accepted no matter what character I am playing.
What was it like working with John?
With John it was absolutely fantastic, it might sound very clichéd that one actor says this about his co-star, but John is absolutely a wonderful man, he’s really a pleasure to work with, he’s a great human being, and he’s fun and absolutely a delight to work with. I am happy I am doing another film with him, and hopefully a few more. The feeling I get working with John is the feeling I get working with Sanju, they are pretty much alike, in the sense John does his work, comes to the set, he has no hang ups, he has no problems, I like that. I like the fact that everybody should come do their job and go back and cut out all the crap that really goes around.
Kabul Express has been to several festivals like Toronto, PUSAN, London, what was it like representing Indian cinema in the international forum?
It was very nice. In fact I am very proud that the first film that I have done went for the international festival, and it was Kabul Express, because I personally am a bit against art films that happen and go for the festivals they normally portray India in a very very sad manner, it’s always poverty, it’s the huts and bullock carts …the misery, that’s all one sees. I am very proud that Kabul Express gives people an idea that, that’s not what India is all about. Just 2 regular guys who are regular people, we are educated, we live in cities, yes we’ve got airports, we have everything. I feel really bad because what we give out is what people accept, that’s the picture they always get, is that this is what India is all about. Kabul completely negates that, and we really know what India is all about, so yes, I am really proud of the fact that I am a part of Kabul Express and that it was shown in all the festivals.
What was the reaction of your family when they heard that you would be shooting in post-Taliban Afghanistan?
My family actually consists of Maria and Zeke, so Maria was a little apprehensive, but not quite, she knows me and she knows Kabir, and she knows that Kabir will not jeopardise anybody’s life in the unit. Yes, there was always tension, there has to be because you are going to a place which has been fighting for years 25 years so yes there is going to be fear which I knew I would do it anyway because I liked the script so much no matter what

Kabir said you knew about Kabul Express right from the scripting stage? What is it about the film that excited you at that stage?
I had heard another script from Kabir ‘Forgotten Army’ and it was an outstanding script. I am aware of Kabir’s capabilities so after reading that script I knew whenever this guy ever makes a movie he will make a very good film. When he started writing Kabul Express and before even he could finish it I was on and I said yes I would do it because I knew he would always write a very good sensible script and he will always make a very good sensible film.
Tell us a little about your experiences while shooting in Kabul for Kabul Express
It was exciting, I will be very honest and I had a blast. I enjoyed myself in spite of the fact that we were confined to one hotel where you could not step out of. We used to just get into the car to go to the location for the shoot and get back to in the hotel. I enjoyed myself and was so excited going to Kabul because it was a place one would never go ever. I was going to a place which I would be going for the first and last time in my life so I just wanted to soak everything in. I went out to the markets, to the streets, to the street vendors and chatted up with the people and I did everything that nobody would really do. I love the place, the people, everything over there. I was so fascinated with Afghanistan. There are ten year old kids with maturity on their face of a fifty year old man. There are fifty year old men who behave like children. It’s outstanding how they constantly face the fear of death. You will never see them unhappy or sad ever as they are always smiling. There is so much of trouble that you can see more AK 47 then mobile phones.
From the Promos you come across as playing a comic character can you tell us more about your character?
I am playing a character who has a sense of humour. He’s not comical. It’s just that he has a good sense of humor and he cracks his little fatas here and there. Apart from that Kabir really wanted that light heartedness in the film because the story is so grim and serious that he wanted that aspect of comedy. I will not say this character is funny he has his moments. He’s sad, he’s got all the expressions and yes he does have a sense of humor.
Does this film signify the trends of different films that you would be doing?
No. I am very clear with my perspective and everything. And I know I will do the film that will excite me, that I would like to watch, that makes me feel good. That is irrespective of what genres it comes in and what kind of film it is. I look at a film, I hear the story, I see the film in my mind, if I like the film I’ll do it, if I don’t like it I won’t do it.
You have worked with several first time directors? What was it like working with Kabir?
Kabir didn’t look like a first time director at all from any angle. He looked like a very experienced man who knew his job absolutely well. He knew his shots, he knew everything and I think that comes from all the experience he has with documentary film making. I think that’s a very tough school because you don’t get a second chance when you are making a documentary. You have to capture the moment. For a film like this I realized, that he knew what we wanted from the onset.
Kabul Express is out in cinemas now