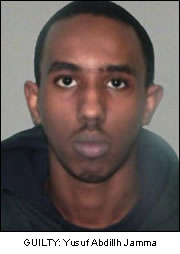 A BIRMINGHAM man accused of shooting dead a West Yorkshire policewoman has been found guilty of her murder.
20-year-old Yusuf Abdillh Jamma, from the Small Heath area of Birmingham, was found guilty of the murder of PC Sharon Beshenivsky by a jury at Newcastle Crown Court following an 11 week trial.
Pc Beshenivsky, 38, was shot dead outside the Universal Express travel agents in Bradford last November after responding to an armed robbery call. Her partner, Pc Teresa Milburn was also shot but survived after alerting her colleagues to the shooting.
Jamma had admitted robbery and two firearms offences but denied murder.
But the jury of six women and five men unanimously found Jamma guilty of murdering PC Beshenivsky following more than 17 hours of deliberations.
During the trial the court heard Jamma admit that he fired the fatal shot which killed PC Beshenivsky but denied murder saying he did not fire the gun intentionally.
Brothers Faisal and Hassan Razzaq were cleared of murder but convicted of manslaughter and robbery, and Raza Ul-Haq Aslam, 25, was cleared of manslaughter and murder. The jury are still deliberating on a robbery charge against Aslam.
Faisal Razzaq denied he was acting as a look-out during the robbery despite admitting he was round the corner from the travel agents.
Aslam told the court he had no part in the robbery or murder and was simply “in the wrong place at the wrong time.”
He said he believed he was entitled to a £100,000 reward for helping police catch Pc Beshenivsky’s killers because he rang Crimestoppers and passed on information that led to the arrests of the defendants.
Another man, Muzzaker Imtiaz Shah, 25, previously admitted murdering Pc Beshenivsky. He was cleared of the attempted murder of Pc Beshenivsky’s colleague Pc Teresa Milburn earlier in the trial.
The 11-week trial heard from a number of people including Pc Teresa Milburn who described the moments leading to the fatal shooting. 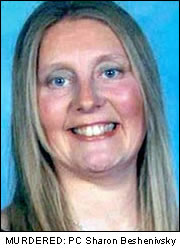 She told the jury PC Beshenivsky and herself were the first officers to respond to a silent panic alarm which had been activated by staff at the travel agents.
As the duo walked towards the travel agents, PC Milburn said she heard noises coming from the shop before she saw a man and heard a “bang”.
Speaking on the moment PC Beshenivsky was shot, she told the court: “I can see her head. It goes to the right, then to the left, and flops. Her arms flop to the side. Her body drops in front of me. Her knees go to the left and she goes straight down and collapses.”
After seeing her colleague fall to the ground, PC Milburn was then shot herself.
She said: “I was lying on the floor. I was coughing up blood.
“I could feel blood running down my nose and blood over my face, and I was gasping for breath.”
As the group fled the scene, she managed to send a Code Zero alert over her police radio indicating an officer had been shot.