An entertaining comedy show this Christmas 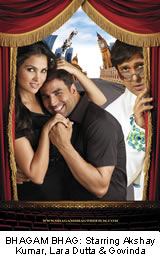 There is no better time than the festive season of Christmas to enjoy a laughter-riot from the comedy king, Priyadarshan, who is back with another directorial venture, Bhagambhag.
He is back with Akshay Kumar after his successful Garam Masala. And who better to support a comedy chase on screen than Paresh Rawal, Rajpal Yadav and Govinda making his comeback- a comic complement to Akshay. Then there is the gorgeous Lara Dutta who plays the romantic interest of Akshay.

The story begins in Mumbai where Paresh Rawal runs a famous theatre group in India and is offered to perform thirty shows in the UK. Both Akshay and Govinda work as performers in the shows; but due to their constant series of pranks, the key female protagonist opts out of the show at the last minute on their tour to London.

A mad goose chase begins for Akshay and Govinda. They find a taxi driver, Rajpal Yadav, to drive them all around London in search of a replacement to save the act. Mishaps follow involving gangsters and finding a girl to play the role. Then another journey into comedy mayhem starts with the girl’s amnesia.

The film, which is shot extensively in London, makes you to put your running shoes on because there is going to be Bhagambhag this Christmas. For the first time on screen we see an exciting combination of Akshay and Govinda with the vivacious Lara Dutta as a surprise icing on the comic cake.

It is another super entertainer from Priyadarshan and another musical triumph for Pritam.
By Jai Kumar
Bhagambhag is out in cinemas from 22 December