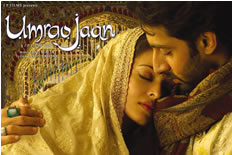 The real wealth of people is in their culture and literary work. One such work was Mirza Hadi Ruswa’s Umrao Jaan Ada. The story is as follows. . .
When Umrao Jaan first came to Lucknow, she was known as Amiran, the eight year old daughter of a lower middle class family.
Her father was a Jamadar at the ‘Bahu Begum ka Makhbara’ in Faizabad.
A simple man, he gave evidence in a case against Dilawar Khan, a habitual offender. Dilawar was sentenced to jail for ten years.
After finishing his sentence, Dilawar came out of jail, only to kidnap little Amiran and take her to Lucknow where she was sold to a kotha owned by the strict Khanum Sahib. This was an act of revenge by Dilawar.
A kotha in those days was a centre for excellence in performing arts. As an inmate of the kotha, little Amiran benefited the most.
Khanum gave her the name ‘Umrao’ and was brought up in style as she learnt the art of music and classical Indian dance.
As years went by, Umrao’s popularity increased in the city of Lucknow.
A beauty that was stunning and a manner that was enticing, gave the name of Umrao Jaan sheer joy to those who were watching and listening.
it is not long before she comes across Nawab Sultan.
With the whole of Lucknow at her feet, Umrao craved for Sultan’s company.
But somewhere deep inside her being, she had a dream of a husband, a family and a home. She chased her dream from one end of the rainbow to the other. Would her dream ever come true? And would she come face to face with her long lost family once again?
This moving tale which is retold from the original classic of the 70s Umrao Jaan has all the answers.
Aishwarya Rai slips into the shoes of legendary star Rekha who shot to fame after her performance in the original version.
This remake also sees the pairing of Abhishek and Aishwarya for a second time after their performance in Kuch Naa Kaho.
Let’s hope they will create a box office stir in Umrao Jaan when it releases by Adlabs Films in the UK cinemas very soon.