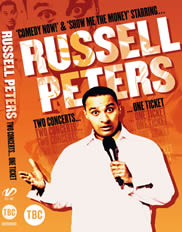 Russell Peter’s new DVD ‘Two Concerts One Ticket’ (released 16th October) should carry a warning. Something I came to painfully realise after watching an hour and a half of the incredibly belly bubbling DVD with a cup of tea in my hand!
Despite both shows not being current Russell material (Comedy Now 1997, Show me the funny 2003), his incredibly hilarious routine proves comedy doesn’t have to be current to be funny.
For those of you who are looking at Russell with the air of familiarity, you may remember him when he hosted two seasons of the BBC’s former flagship Asian show Network East. He was funny then, and he’s still funny now. Hailing from Toronto, Canada, Russell has built a worldwide fan base with his ethnic take on everything from girls in England, to business relations with the Chinese.
In the first of the DVD’s two shows ‘Comedy Now’ offers the biggest laughs of all. As an Asian comedian, Russell doesn’t shy away from race and delivers his jokes with enough wit to bypass any intended offence. Often picking out people from his audience, his ‘off the top of his head’ comedy proves there may not be a better Asian comedian with the skill of turning a simple situation into a laughter-roaring success. Picking out an unsuspecting Chinese man from the audience, Russell delivers his best line from the show (read below to see what you think!)
And there’s more of the same in Show me the Funny as Russell delivers the same impromptu lines that have made him a worldwide success. If you missed Russell’s recent UK tour then fret not, grab yourself this DVD and enjoy the man in the comfort of your very own room…preferably without a cup of tea!
Russell Peters – ‘Two Concerts…One Ticket’ is out to buy now
Review By Zakia Yousaf
The best of ‘Two Concerts…One Ticket’
“Chinese people and Indian people cannot do business together because Indian people can’t get along without a bargain, and Chinese people cannot give you a bargain. Their objective is to get every penny from you. And ours is to keep every penny. There’s a really bad power struggle there. I went to this Chinese mall. Some of you may know it – Pacific Mall. That’s the wrong place for an Indian guy to go. I saw this bag; I want to buy this bag, I go to the Chinese guy behind the counter, ‘How much?’ He goes, [(In a Chinese accent)] ‘Thirty-five dollars.’ ‘Um, How ’bout thirty?’ And Chinese people will never tell you no. They’ll tell you “no,” the longest “no” you heard in your life, like you just said the most ridiculous thing they ever heard in their life. ‘I’ll give you thirty.’ [(In a Chinese accent)] ‘No-oooo. No-oooo. I can’t do thirty dollars. I sell you thirty dollars today tomorrow you come I close down.’…[(In a Chinese accent)] ‘Ok. You seem like nice guy. I give you best price. Thirty-four fifty.’ I’m like, ‘That’s fifty cents, man.’ [(In a Chinese accent)] ‘Fifty cents is a lot of money. You save fifty cents here then maybe you somewhere else and you save another fifty cents, then you have one dollar. Then you take your dollar, you go to the dollar store, you buy something else.”
“Soon everyone will be inter-racial. We’ll have weird mixes…Like a French and a Greek; we’ll have a little Freek. A man from Iceland a Cuban; an Ice Cube.”
WIN A COPY OF ‘TWO CONCERTS…ONE TICKET’!
We have teamed up with VDI Entertainment to offer three lucky readers a chance to get their hands on Russell’s new DVD. To be in with a chance of winning, all you have to do is answer this very simple question.
Which country does Russell Peters come from?
Is it:
A) Scotland
B) Spain
C) Canada
If you think you know the answer, send your answer along with your full address and contact number to Russell Peters DVD Comp, The Asian Today, PO Box 13544, Birmingham, B11 9BZ.
Alternatively e-mail your answer to zakia@urbanmedialtd.com
Closing Date: 28/11/2006
Winners will be selected at random