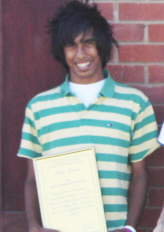 For 17-year-old Leicester lad Prathiv Kholia, football is his life. While you’ll see many other local lads playing the game in their nearest playing field, Prathiv is taking his love of the game to another stage. The Bosworth Community and Sports College student is one of the cities most active sport volunteers not to mention a budding football coach (He’s already passed his Level 1 Certificate in Coaching). While the sight of Asian footballers in the professional game is somewhat of a ‘needle in a haystack’ scenario, Prathiv proves there are open opportunities away from the games main stage.
Speaking to The Asian Today, the Leicester City fan, explained why he was drawn to the game, and what he hopes to gain from coaching.
To begin, can you explain why you have such a passion for football?
To be honest I don’t know where my passion for football comes from because most of my family prefer to watch cricket coming from India. As a young boy in school I found myself playing football on either the field and or on the playground. As a Leicester City fan I was also going to fans fixtures games down at Leicester Filbert Street and friendly games at the ground, so I think that’s where it all really started. So I think its really been from going to watch Leicester city play – I am one of those people who hate to see the team they support, losing or not doing so well so I think that’s where my passion comes from. This is both on a professional level semi-pro and junior league level, like when I go and see my friend’s team play down the road. I love watching good football being played as well and I think when u see good football being played it just increases your passion
Most guys your age would just prefer to play the game in their local park, but you’re involved in the game on such a bigger level. What’s the reason behind this?
I just wanted to share my passion for the game and help players develop their skills so they can succeed fully in the game and expand their talent at a young age.
When I took my FA Level 1 coaching badge and took part in the Step into Sport programme, a lot of opportunities opened up for me. I would have to thank Chris Ripley the local development officer at Bosworth College for the opportunity and Leicestershire county FA as well.
Why did you chose to coach?

Well one part of the sport science course at college is practical coaching so throughout the year we were always coaching and this was my time coaching any sport really and I really enjoyed it and got good feedback from my teacher, so that’s probably what led me to going on to do further coaching and taking my FA coaching level one. I’m also currently enrolled in a volunteer program called ‘Step In To
Sport’ and am working towards passing this. It requires volunteer work – 50 hours for a bronze award, 100 hours for a silver award and 200 hours for a gold award. I’m currently heading towards the 200-hour mark which is fantastic. It’s just a great way to pass on skills that you have seen and been used to over the years when you have been coached. The inspiration I’ve also obtained from my friends who coach, teachers at college and others has pushed me towards coaching.

What are some of your biggest achievements to date?

Probably my biggest achievement was going on the Young Leaders Camp in Ascot this July. I found this experience awesome and it was a great weekend because we all wanted to have fun and a laugh over the weekend but we knew we were there for a reason because we were good young aspiring coaches so we all wanted to learn and get the experience what was on hand over the week. Being recognised and chosen by the Leicestershire County FA to send me to Ascot was also a big achievement. And not to forget passing my FA Level 1 earlier this year in March.
What are your hopes for the future? Will you look to pursue a career as a professional footballer, or as a coach?
I would love to be a professional footballer but it’s probably to late (laughs) but I’ll keep trying! Currently I’m doing my A2’s in Sports Science B-tec award and Design, and I have taken up AS PE for one year as well. After ‘hopefully’ passing my A2’s I would want to go on to university to do Sport Science, because I’m so passionate about sports and thought it was only right to carry on in that direction. Hopefully at university I will be able to carry on doing some coaching in my spare time. I want to aspire to be a top coach in life even though I don’t know what field of sport I want to go in to at the moment. With sport science there comes a lot of opportunities like being a PE teacher, physiotherapy, personal trainer. Hopefully with enough experience and knowledge behind me I will be able to come a professional coach. Soon enough I would like to take my FA level 2 coaching badge, so I can carry on my coaching knowledge.

If these problems amount to little more than a peeve individually, you could be ideal for a connection

Itihaas Restaurant adds another partnership to its impressive portfolio with a new deal with...