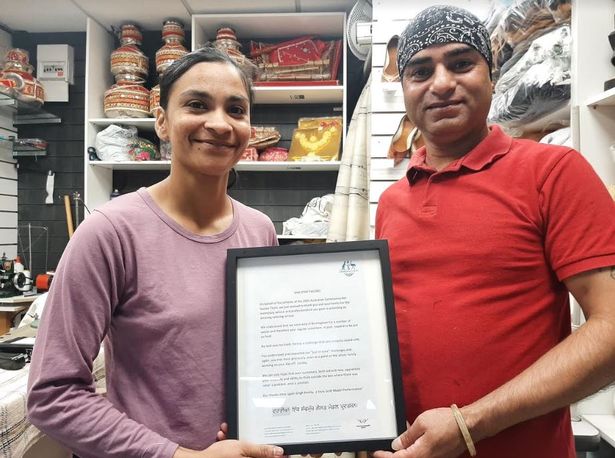 The Australian Team found themselves in sheer panic when they had a severe uniform shortage.

They needed 400 pieces of kit in just three days, the athletes and team bosses were left scratching their heads, a humble tailors hidden in the Perry Barr market village came to the rescue.

One Stop tailors, Amrik Singh, 40 and Mandeep Kaur, 25 worked all hours, day and night to stitch together around 400 pieces including shirts, trousers and shorts.

Once the final stitch was sewn the skilled tradesmen delivered the kit, the Australia team were so happy with the results they penned a warm letter to the sewing dream team thanking them for their “amazing tailoring service”. Amrik and Mandeep have now had the letter framed and put it on proudly on display in their small shop.

Shop owner Amrik, opened his store in One Stop Shopping Centre 18 months ago, received a contact from sports marketer Shane Redenbach who co-ordinates Australian sports teams uniforms. The business boss said: “Shane approached other tailors who could not offer proper prices and he then asked me.

“In 10 minutes I explained everything and he was worried as he only had three days. I accepted the job and put a sign outside the store putting all customers on hold as my responsibility was him.

“Customers thankfully were not angry and willing to compromise. We worked night and day. It was a big target and only three days.”

Amrik and Mandeep got together other members to help tailor up to 400 pieces with materials provided by Shane. They produced 200 tops, 30 trousers, 50 shorts, 50-60 T-shirts and 15 shorts for para-athletes. Each piece was a bold teal colour with yellow strips and the Australian Commonwealth Games Team logo.

Amrik and his team worked from July 22 tO July 27 and even put a sign outside the store telling customers they would not accept orders until the Commonwealth job was complete.

Amrik continued: “I got 200 pieces done in two days. Saturday, I started work in the store and Sunday I worked for 16 hours continuously in my home. I worked 10am-2am.

“We charged a normal price and he even asked if we would charge extra due to time, we said no and still charged normal price. We charged £10 per T-shirt and trousers were large to extra-large so £15-20.

“We are proud of our work. He gave me six Commonwealth Games tickets for July 30 but I had no time as I had a lot of work. He then gave me and my family six more tickets, we went August 2 to Alexander Stadium. One ticket is £125, and I got it free, athletics was great.”

After uniforms were packed and ready to go, Team Australia were so moved by the tailors’ work ethic in such little time, they wrote a gushing letter thanking the family for their “Gold Medal Performance!”

The letter said: “On behalf of the athletes of the 2022 Australian Commonwealth Games Team, we just wanted to thank you and your family for the exemplary service and professionalism you gave in providing an amazing tailoring service.

“We understood that we were only in Birmingham for a number of weeks and therefore your regular customers, in part, needed to be put on hold. No task was too hard, merely a challenge that you so easily coped with.

“You understood and respected our “just in time” challenges and, again, you met them graciously, even to a point of the whole family working on your day off; Sunday. We can only hope that your customers, both old and new, appreciate your creativity and ability to think outside the box where there was never a problem, only a solution. Our thanks once again Singh family; a truly Gold Medal Performance!”